For the exhibition James Capper presents a selection of imposing, welded-steel sculptures from the series of Mountaineer Teeth. Ron Arad presents six culptures made up of compressed Fiat 500s. 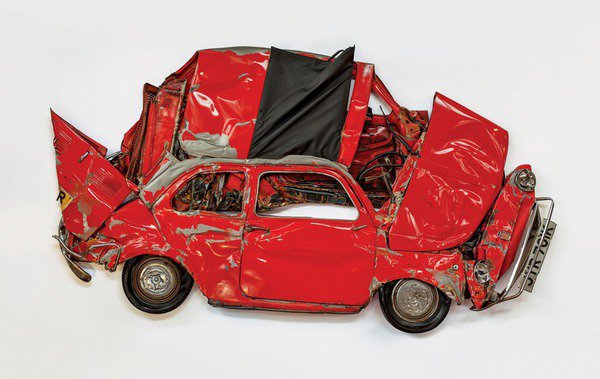 Mountaineer will feature a selection of imposing, welded-steel sculptures from the artists’ series of Mountaineer Teeth. Capper’s works follow the legacy of early Earthworks by Michael Heizer, Dennis Oppenheim and Robert Smithson whereby abstract changes to the land are reflective of human engagement with the environment. However, in Capper’s large-scale public installations this idea is accentuated by an emphasis on the role of man-made machinery’s affect on the landscape. The exhibition also includes several illustrative works on paper, which relate to the artist’s realized and theoretical “Earth-Marking” machines. In Cabs for Step Type Markers, 2012, alternating designs for a future mechanism are worked out in the artist’s characteristically loose, playful manner – adding a humanistic element to an otherwise industrial entity.

Over the last decade, Capper has created a population of his human-operated machines designed to interact with specific forms of natural terrain. They are often outfitted with interchangeable components, which allow for a variety of earth-markings to be left as evidence of such performative interactions. The ongoing evolution of these apparatus’ has been similarly chronicled in Capper’s recent solo exhibitions: Divisions, Yorkshire Sculpture Park, UK (2013) and Tools of the Trade, Hannah Berry Gallery, London (2015). Capper will unveil a new monumental machine later this year as part of a commission by the Cass Sculpture Foundation in Goodwood, UK.

James Capper was born in 1987 in London. He received his B.A. in Sculpture from the Chelsea College of Art and Design and his M.A. from the Royal Academy of Art, London, where he was presented with the Jack Goldhill Award for Sculpture. Capper’s works have been included in recent important exhibitions at the Kunstlerhaus Bethanien, Berlin; The Moving Museum, Dubai; The Saatchi Gallery, London; and the Victoria and Albert Museum, London. He lives and works in London, UK.

Paul Kasmin Gallery is pleased to announce its representation of Ron Arad. For the first time in the United States, the gallery will present In Reverse, an exhibition of the artist’s recent metal works from February 12 – March 14, 2015 at 515 West 27th S­­treet, New York.


In Reverse was first installed at the Design Museum Holon, Israel—the iconic building which Arad designed himself—and later travel to the Pinacoteca Agnelli, Torino, Italy in 2014. The exhibition examines the ongoing dialogue between handmade and digital processes in his practice. Rather than manipulate materials to generate functionality, Arad reverses their utilitarian purpose and transforms them into one-of-a-kind objects.

Comprised of six of Arad’s “Pressed Flower” sculptures made up of compressed Fiat 500s in varying colors mounted on the gallery’s walls, In Reverse also illustrates Arad’s long-standing fascination with crushed metals which he continues to collect in the form of soda cans or toys destroyed by oncoming traffic. For Arad, these crushed car sculptures are “the nearest thing you could do in three-dimensions to action painting.” Even the Fiat itself retains iconographic importance to Arad; the Fiat Topolino 500c Giardiniera was his family’s first car, and as a child, his father nearly died in an accident in the vehicle.

The exhibition will also feature Blame the Tools (2013), a to-scale, digitally grided 3D model of a Fiat in steel and bronze. In Reverse continues to highlight Arad’s exploration of material, form and function over the last thirty years with an earlier work, Restless (2007), a gravity-defying bronze bookcase. This functional piece simultaneously overlaps convex and concave surfaces to create a seemingly impossible balance that appears effortless.

Ron Arad (British, b. Israel 1951) stands out for his daredevil curiosity about form, structure, technology, materials and for the versatile nature of his work, which spans industrial design, hand-crafted studio pieces, sculpture, architecture, and mixed media installations. In 2013 Arad was elected as a Royal Academician by the Royal Academy of Art in London and the first major retrospective of his work titled No Discipline, debuted in 2008 at the Pompidou Centre followed by the Museum of Modern Art in 2009.