Etel Adnan is a Lebanese-American poet, essayist, and visual artist, As a poet and novelist, Adnan is one of the leading voices in contemporary Arab American literature, alongside which, since the 1960s. 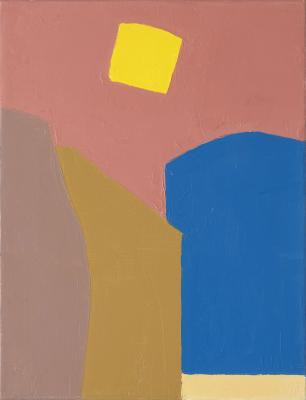 Etel Adnan is a writer and painter. She was born in Beirut in 1925, and studied philosophy at the Sorbonne in Paris in the 1950s, then pursued post-graduate studies at Berkeley and Harvard. She settled in California, acquired American citizenship and became a teacher. Since the 1960s, she has painted vibrant and brightly coloured small abstract landscapes.

Although her work had been regularly exhibited in the United States, France and Lebanan since 1960, it was only following her participation in the 2013 Documenta in Kassel that her work became international recognised. In 2014, Hans-Ulrich Obrist organised a vast retrospective at Mathaf, the Arab Museum of Modern Art in Doha and published an impressive catalogue. The Whitney Museum in New York included the artist in its famous biennial where her work received much attention, while the Museum der Moderne in Salzburg has just organised a retrospective. Writing in French and English, Etel Adnan has published around twenty books in each language. She has also written for the theatre, working with Bob Wilson and the British composer Gavin Bryars.

Galerie Lelong is presenting her first major exhibition in Paris, which will be followed by another in April organised by Galerie Lelong New York.