The exhibition will entail a visual exploration on the anthropophagic subject with artists from North and South America, Portugal and Spain. 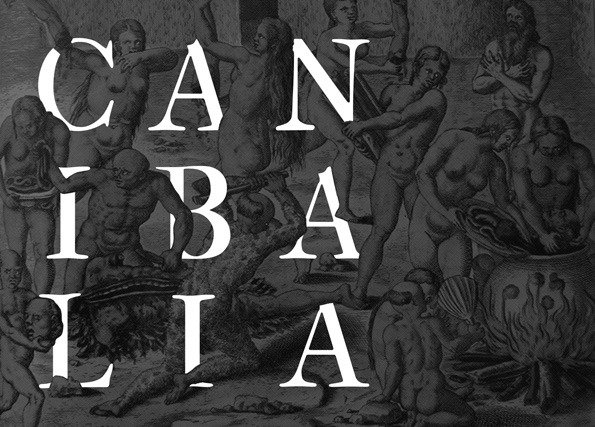 Canibalia is a research and exhibition project curated by Julia Morandeira Arrizabalaga around the figure and notion of the cannibal. Gathering artists from North and South America, Portugal and Spain, the exhibition will entail a visual exploration on the anthropophagic subject.

The cannibal is a quite recent invention. Its first mention dates back to Columbus’ initial American trip in 1492, when he hears from the indigenous people of a bellicose tribe inhabiting the southern islands of the Caribbean archipelago, “which had just one eye, a dog face” and were man-eaters; these were referred to as carib and caniba. Beyond naming the anthropophagous monster, as well as the geographical area it inhabits, the anecdote of the creation of the term resumes well the colonial, modern and capitalist crucible in which the cannibal was constructed. It defined an unstable and speculative imaginary, subject and territory in which renewed spectres of alterity, cultural anxieties and imperial interests converged. In fact, being sacrificed, cut into pieces, butchered and devoured appears as the most recurrent fear in Europe’s imagination of America, thus multiplying the meanings and images of the cannibal trope.

However, in the 16th century cannibalism had more to do with thought and imagination than with the actual act of eating, and always named or referred to other things. Cannibalism was associated with a voracious and gluttonous femininity, the image of the lustful old witch, and the colonial masculine tension between the desire of eating and the fear of being eaten. It defined America in a similar fashion, portrayed as the locus of abundance and exuberance, limitless yet wild and unruly. Furthermore, together with an “unnamable sexuality” and a repertory of “bad habits”, it was a sign of abjection. And beyond morals, the cannibal also referred to the rebellious Indian and the workforce in the new exploitation and expropriation system. It was the imprint of the savage, lawless, stateless and everything that modernity deemed as primitive; it defined the inconsistent, docile yet ungovernable vegetal nature of the Indian and its representation. Moreover, cannibalism was placed at the core of the juridical debates of the times, transforming the cannibal into an object of law and the justification of conquest; but also and inversely, it served as a metaphor of the colonisers’ violence. In the age of the first collections and academic divisions of knowledge, the cannibal Indian became as well the natural object of ethnographic study and exhibition. And finally or just plainly, it was the expression of cultural terror.

Since its inception, the figure of the cannibal overflows the mere anthropophagous act. And as a matter of fact, the cannibal ritual had little to do with nutritional factors. Rather, it was inscribed in warfare and vengeance. Eating the other meant eating his/her position and perspective in the world; it implied the transformation of the self through the incorporation of the other, and an understanding of society as a centrifugal force of exchange. This scheme is functional under a framework in which modern partitions between nature and culture, animate or inanimate, human and non-human, do not operate. Instead it proposes a topology of perspectives and positions in an interconnected ecosystem, in which distribution takes the place of production and exchange substitutes accumulation. A “green” thread of cannibalism can be traced from the colonisers’ accounts of the 16th century, through the writings and works of the Antropofagia movement in 1920s Brazil to nowadays turning in anthropology, which in turn echoes the political demands for the rights of nature and indigenous land struggles.

Canibalia explores the construction of the cannibal as the bricolage of these different tropes through the friction of historical documents, contemporary works and objects. By so doing, the aim is to trouble the visual and epistemological archive, thus problematizing a naturalized or univocal reading. The cannibal conforms a multi-stable, seismic image in which different temporalities and lines of flight to apparently distant but profoundly attuned topics converge and collide. As a result, the fundamental ambivalence of the cannibal trope is rendered visible: how cannibalism – as a landscape of different metaphors – constantly defies and rearticulates coloniality’s rhetoric, be that imperial or global; how it implies both the fear of dissolution of the self and the appropriation of difference. Further exploring the logic of predation, capture and digestion of the other, it posits a geography of devouring perspectives and positions, in which subject, territory and environment reciprocate the plasticity of thought. In sum, Canibalia is a counter-topia from where to (un)think cannibalism and the cannibal as spaces of dissidence, desire, community, ecology and exchange.