'Fit for purpose' shows artists who explore the relationship between the everyday, design and art. 'Interior from the Collection' presents throughout art history, paintings of interiors the expression of individual or societal sensibilities. 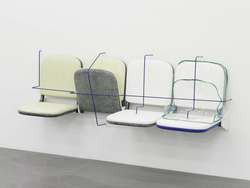 Design is increasingly becoming contemporary culture’s primary discipline. Perfect, computer-generated and often de-personalized surfaces determine the perception of virtually all areas of life. The designs of display screen content, consumer goods and living spaces have led to the rise of an aesthetic high-tech cosmos encompassing all realms of life. Fit for Purpose alludes to the sobering expediency of today’s design, which is rooted in the legacy of modernism and the Bauhaus, and which seeks to communicate a sense of well-being and authority with an at times almost ascetic veneer. Entirely in the vein of the diagnosis, which is often mistakenly thought to be a quote by Marshall Mc Luhan, “We shape our tools and thereafter our tools shape us,” the high-gloss environments of corporate architecture are shaping us into successful, performance- and consumption-oriented users. And even in the context of the private sphere, the same type of design is regarded as the standard today. In recent years, artists have dealt more frequently with these surface phenomena. They employ this aesthetic as the basis of their work, and, in contrast to this, also play with the material aesthetics of the found or the discarded. Their questioning begins with the design legacy of modernism, focusing on the relationship between the design norms of public and private spaces and on the potential spaces in between. How do we move through such spaces, what influences our perceptions of them, which associations are triggered by the surfaces, forms and materials?

The invited artists – mainly from the generation of digital natives, skilled in new information technologies and fluent in the language of corporate communication – contrast orchestrated public and private space and product designs with tongue-in-cheek alternatives. They mirror the working, production and utilization conditions of today’s consumer culture, reinterpret cultural phenomena, manipulate slick everyday design by exaggerating or distorting it formally, comment critically or neutrally on conventions of use or viewing or invest these with the personal, the anecdotal or the physical.

Following a long tradition of artists who explore the relationship between the everyday, design and art, and who work with materials and construction products, casting them in an unfamiliar light, the focus today is divided equally between the potentialities of high tech, industry or of handicraft. Since the Arts & Crafts movement at the end of the nineteenth century, which marked the origin of design as a nostalgic counter-stance to industrial production, Pop Art, which adopted the seduction strategies of 1950s consumer culture for use in art, and Minimal Art, which sought during the 1960s to approximate industrial manufacturing processes and their formal vocabulary, thereby adding a range of new materials to the canon of materials, the constellations of art and design have shifted numerous times and have today even become their own discipline with a complex discourse.

Interior from the Collection of Glarner Kunstverein

Throughout art history, paintings of interiors have always functioned as the expression of individual or societal sensibilities. The environments depicted provide insight into domestic surroundings, workspaces or staterooms rendered in perspective. Furniture, decoration and household items, at times even the inhabitants of the rooms, allow access to an epoch or a social milieu on both sociological but also allegorically encoded levels. The portrayal of interiors began its development in the seventeenth-century in the Netherlands, and became in the eighteenth and nineteenth centuries a popular, courtly and bourgeois painting theme. Frequently, the paintings contained allegorical statements. Others are simple representations of daily life and depict the preferences or ideologies of their inhabitants. Still others simply show the appeal of the space and the items contained within.

The twentieth century brought forth a new topos of the interior, spaces filled with isolation, constriction and oppression. Only rarely was it still a place of refuge or safety. Instead, psychological states were expressed. The interior – be it the space of the home, work or stateroom – is ultimately also a present-day motif and is the subject of literature, film and visual art. Accordingly, the Glarner Kunstverein also features paintings and sculptures of this genre in its collection, including works by Luca Frei, Erika Sidler or Veronika Spierenburg, who, in their own ways, deal with furniture as sculpture, or the depictions of interior scenes capturing the simple, country life or the artist studio by Victor Tobler, Johann von Tscharner, Mathias Wild, Jakob Wäch, Lill Tschudi, Paul Basilius Barth, Johann Peter Flück, Konrad Grob, Max Gubler, Ernst Morgenthaler, Kurt Mühlbauer, Albert Schnyder and Ruth Stauffer.