The exhibition presents more than 100 works.It includes forty-seven sculptures, one cell, one painting, and fifty-four works on paper and fabric, stretching over seven decades. The selection aims to show the range of Bourgeois's work, and highlights her experiments in different materials, techniques and scale. 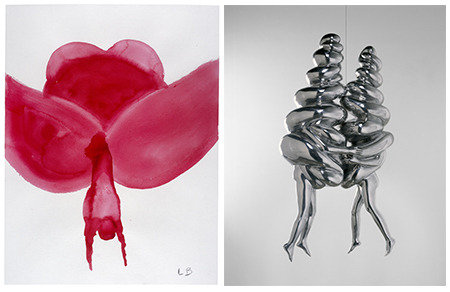 This spring, Moderna Museet highlights Louise Bourgeois, one of the most important 20th and 21st-century sculptors. Her art serves as a bridge from Modernism and continues to exert its influence on contemporary artistic practices today. Louise Bourgeois – I Have Been to Hell and Back is the most comprehensive Swedish exhibition of Louise Bourgeois’s art to date. It demonstrates the width of her oeuvre and presents her captivating and varied body of work over seven decades. One-third of the pieces in the exhibition have never before been shown publicly. Before entering the exhibition, visitors will encounter her monumental work Maman, a gigantic spider sculpture, which is standing outside the museum on Skeppsholmen.

The art of Louise Bourgeois (1911-2010) is complex, radical and full of subversive humour, danger and fear. She succeeds in formulating that which is hard to find words for, and her creative urge was intimately linked with her need to understand, imbuing her oeuvre with a compelling psychological dimension.

Curator Iris Müller-Westermann:
“Louise Bourgeois’s art, which encompasses a range of emotions, is both complex and radical. At times it can be frightening and very direct. Bourgeois expanded the realm of three-dimensional art and became an inspiring innovator in the field of sculpture. She fathoms the depths of human existence, and makes visible her struggle to combine the roles of artist, mother, and wife in the twentieth century. The perspective she formulates is quite different from the male point of view that has for centuries described and explained the world. As Bourgeois stated: ‘I have endeavoured during my whole lifetime as a sculptor to turn woman from an object into an active subject.’”

Louise Bourgeois was born in France, where she studied art for a number of artists, including Othon Friesz, André Lhote and Fernand Léger. She moved to New York in 1938, where she began her career as an artist. From the mid-1940s she started creating semi-abstract sculptures that also bore the imprint of late Surrealism. This movement was still active in New York after the war, which had driven so many artists there from Paris, including Max Ernst, Yves Tanguy, Joan Miró, and Marcel Duchamp, all of whom Bourgeois knew personally. At the same time, Bourgeois was a member of the emerging New York school of abstract expressionism.

“In the 1960s, Bourgeois’s style became more individual. In a radical departure from her wood sculpture, she started to experiment with materials such as latex and plaster to express complex feelings that had risen to the surface. This was partly a result of the psychoanalysis she had started in the early 1950s, following the death of her father in 1951. She continued to explore the human body, but now from the inside out. Though more abstract, her forms, with their labyrinthine interiors, can be seen to represent the fragmented body, turned in on itself,” says Iris Müller-Westermann.

Louise Bourgeois’s international recognition came with her retrospective at the Museum of Modern Art in New York in 1982, by which time Bourgeois was seventy-one years old. Commenting on this, she said, “(…) nothing protects you like anonymity. This, by the way, has been the story of my career. For many years, fortunately, my works were not sold for profit or for any other reason. And I was very productive because nobody tried to copy my alphabet. (…) My image remained my own, and I am very grateful for that. I worked in peace for forty years.”

Moderna Museet’s Louise Bourgeois - I Have Been to Hell and Back is a major survey of Bourgeois’s oeuvre and, with more than 100 works, it is the largest exhibition in Sweden to date. It includes forty-seven sculptures, one cell, one painting, and fifty-four works on paper and fabric, stretching over seven decades. The selection aims to show the range of Bourgeois’s work, and highlights her experiments in different materials, techniques and scale. Nearly one-third of the exhibits have never been shown in public before. This alone is sensational. The exhibition itself is divided into nine rooms, each highlighting a theme central to Louise Bourgeois’s work. The rooms do not follow any chronological order. Instead, the exhibition explores how themes were taken up by the artist and developed during various phases of her artistic career.

In conjunction with the exhibition, a richly illustrated catalogue will be published, with texts by Iris Müller-Westermann, literature scholar Léa Vuong, and an interview based on conversations between Louise Bourgeois and Christiane Meyer-Thoss in New York in the 1980s. The catalogue also includes a section of documentary photographs and letters, revealing further facets of Louise Bourgeois’s life and presenting parallel histories to the works she produced. The catalogue is produced by the Moderna Museet in association with Hatje Cantz Verlag.