It took forever getting ready to exist: UIQ (the unmaking-of). The exhibition centres on a newly commissioned soundwork accompanied by research material and other works that Thomson and Maglioni have created in relation to Felix Guattari's unrealised film. 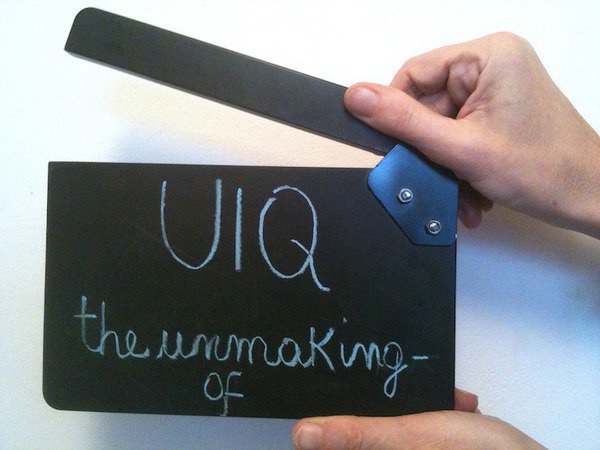 Co-curated and co-commissioned by The Otolith Collective and The Showroom.

it took forever getting ready to exist: UIQ (the unmaking-of) marks the culmination of Graeme Thomson and Silvia Maglioni’s project around Félix Guattari’s unmade sci-fi film Un Amour d’UIQ (A Love of UIQ). The exhibition centres on a newly commissioned soundwork accompanied by research material and other works that Thomson and Maglioni have created in relation to Guattari’s unrealised film.

Guattari’s outlandish screenplay, which he started writing at the beginning of the 1980s, explores what happens when an infinitely small, invisible alien life-force (the Infra-quark Universe or UIQ) makes contact with a community of squatters and begins to desire a form, a face, a body, a language, commensurate with the world of its hosts.

Following on from the 2014 screening of the artists’ own film In Search of UIQ – which charts key moments in the development of Guattari’s project, Thomson and Maglioni have conceived an environment inspired by one of the central dilemmas of UIQ: how to give shape to a bodiless entity that has no spatial or temporal limits.

Working with the paradoxical condition of the unmade as something both already and not yet present, a potential field of shifting forms and forces, the artists seek to ‘produce’ Guattari's film through a collective experience of envisioning, without filming a single scene.

Focusing on the original script, this cinematic process has developed through a series of gatherings held in different countries, to which Maglioni and Thomson give the name “seeances”. In the artists' words:

“A small community of envisionaries are invited to inhabit a zone of autonomous temporality where they become the hosts, receivers and transmitters of UIQ, contaminating each other in turn with their own visions and ideas of Guattari’s film and of UIQ’s possible manifestations, both within and beyond its limits.”

The soundwork recombines fragments of recordings of these “seeances” in a composition of myriad voices and electronic signals, elements that circulate in the Showroom gallery space, offering visitors glimpses of a missing film and universe that, though invisible, may begin to affect their own vision.

Accompanying and interacting with the sound is what the artists refer to as a quantum archive: “expressing its dual nature as process and crystallization, wave and particle”. The archive assembles material relating to Guattari and the Infra-quark Universe, including photos, videos, maps and sketches that range across areas such as Autonomia, free radio, schizo-analysis, and the dark matter of sci-fi cinema.

A further component that will evolve and mutate throughout the show is the artists’ notes for an ongoing English translation of Guattari’s screenplay to be published in late spring 2015.

Exhibition production support in kind from Lisson Gallery and molo.

Graeme Thomson and Silvia Maglioni are filmmakers whose work interrogates potential forms and fictions hidden in the ruins of cinema and moving image. Using cinema in an expanded form to reactivate lost or forgotten histories, they create new modes of collective engagement with contemporary thought through the creation of feature films, exhibitions, sound and video installations, performances, event-works, radio shows and books. Since 2005, their productions (and occasional resistance to production) have been emanating from Terminal Beach, sometimes in alliance with other collectives. Their work has been presented at numerous international festivals and art spaces including FID-Marseille, Bafici, Jihlava, Serralves, Tate Britain, Centre Pompidou, Anthology Film Archives, REDCAT, MACBA and Castello di Rivoli.

The Otolith Collective is a publicly funded, not-for-profit arts organisation run by Kodwo Eshun and Anjalika Sagar of the award-winning artist collective The Otolith Group. The Otolith Collective develops research into lectures, seminars, discussions and screening programmes with a wide range of museums, foundations and private institutions. Recent programmes and exhibitions include Mark Fisher and Justin Barton: On Vanishing Land (2013) at The Showroom, A Cinema of Songs and People: The Films of Anand Patwardhan at Tate Modern (2013) and The Militant Image (2011–ongoing).

Image: Graeme Thomson and Silvia Maglioni: it took forever getting ready to exist: UIQ (the unmaking-of), 2015.
Commissioned by The Otolith Collective and The Showroom, London. Courtesy the artists