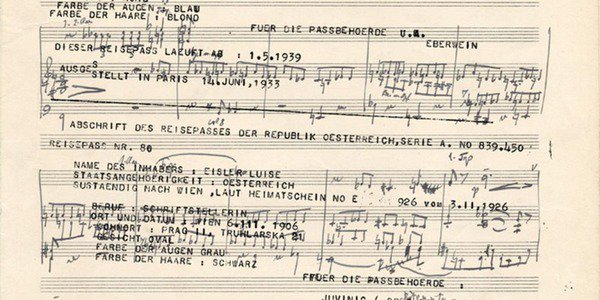 The artist presents her acclaimed work, Part File Score, an immersive 24-channel sound installation accompanied by a series of large-scale prints. For the current presentation of the work, the structure has been modified to feature solo violin in a 12-channel format. Drawing from the histories of 1930's emigre artists, Hollywood film scores and McCarthy-era censorship, Part File Score debuted in an exhibition of the same title at the Hamburger Bahnhof, Berlin in early 2014. Philipsz is fascinated by the generation of emigre artists who fled Germany for America in the 30's and for her exhibition, Philipsz focuses on the composer Hanns Eisler. Eisler, whose father was Jewish, escaped the Nazis in Germany and moved to Los Angeles where he composed scores for films and was eventually blacklisted as a suspected communist. For the exhibition, Philipsz creates a sound installation based on his musical compositions for early motion pictures. The accompanying series of prints layers digital reproductions of the composer's archival scores under material from Eisler's FBI file.