For the exhibition the artist presents sculpture feature drawings and early works in textile, often made in a combination of watercolour and gouache on recycled paper or cardboard as exploratory studies relating to the themes of her sculptures. 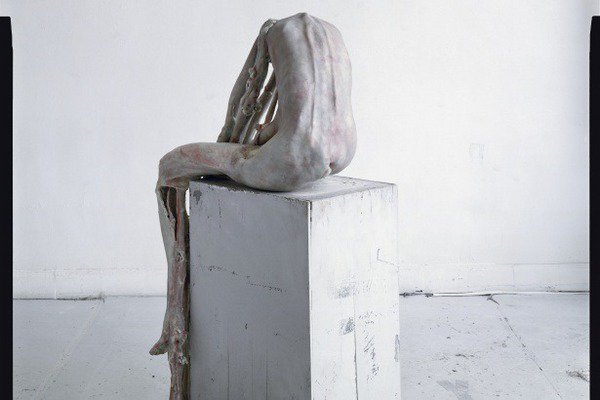 Belgian artist Berlinde De Bruyckere (b. 1964) creates sculptures that reveal the human body and human life in all its frailty. Her installations of equine and human bodies evoke feelings of love and consolation, but also of terror and violence. The work is both emotionally immersive and provocative, regularly creating controversy. De Brucykere’s bitter-sweet images unite pain and suffering with a strong aesthetic appeal. Her Cripplewood presentation attracted great public attention at the 55th Venice Biennale. The Gemeentemuseum Den Haag acquired her sculpture Into One – Another II, To P.P.P., 2010-2011 in 2011 and is now about to hold a major retrospective of her work, much of it never previously exhibited in the Netherlands.

The human body and its visible suffering is the key theme in De Bruyckere’s whole oeuvre. We are now almost immune to images of suffering; the constant stream of ghastly pictures fed to us by the mass media has seen to that. Berlinde De Bruyckere seeks to restore our sensitivity to the suffering that is a timeless and universal part of the human condition. She makes us stop and look at it but leaves us free to make of her work what we will. In doing so, she unerringly explores the limits of the visual representation of physical and emotional pain.

De Bruyckere constructs her sculptures of wax, resin, rope and worn leather or textile and strings together separate wax casts to create single bodies. She is concerned solely with bodies; faces are concealed behind shocks of hair or cloths; heads are often completely missing. Using special pigments, she transforms wax into pallid skin with vague glimpses of blood, veins and contusions. Red patches and ‘wounds’ give the impression of a tortured body and suggest associations with the religious symbolism surrounding martyrs like St. Sebastian – a figure of great significance to Cripplewood. In addition to these religious elements, classical mythology also has a place in De Bruyckere’s work. Ovid’s Metamorphoses are a constant source of inspiration.

Horses are also an important symbol in her oeuvre, used primarily as a metaphor to express profound human emotions surrounding death and mortality.

In addition to her sculpture, the forthcoming exhibition will also feature drawings and early works in textile. De Bruyckere uses her drawings – often made in a combination of watercolour and gouache on recycled paper or cardboard – as exploratory studies relating to the themes of her sculptures. In this respect, she frequently seeks inspiration in the bodies of dancers. The development of ideas with dancers in the studio is a technique of great importance to her and has resulted in various wax sculptures, as well as a number of different series of drawings. These series are not preparatory studies, but function as works of art in their own right, underlining the themes that together form the leitmotif of her entire oeuvre. De Bruyckere’s sketches, drawings, watercolours and sculptures are all interlinked and together constitute a single ‘body of work’.

De Bruyckere trained at the LUCA School of Arts in Ghent. Her work was first exhibited in the Italian Pavilion at the 2003 Venice Biennale. This led to immediate international recognition and her work has since been acquired by major museums, foundations and private collectors around the world. She returned to Venice in 2013 to represent her own country in the Belgian Pavilion.

The forthcoming exhibition, Berlinde De Bruyckere. Sculptures & Drawings. 2000 – 2014, is being held in collaboration with SMAK in Ghent. It is on show there until 15 February 2015, after which a modified version will be presented at the Gemeentemuseum Den Haag and subsequently at Kunsthaus Bregenz in Austria.