Pictures & Scripts is a series of 20 new paintings that juxtapose still images appropriated from black and white films with excerpts from fictive narrative film scripts. Removed from their original contexts, these appropriated film stills capture moments of paused action. 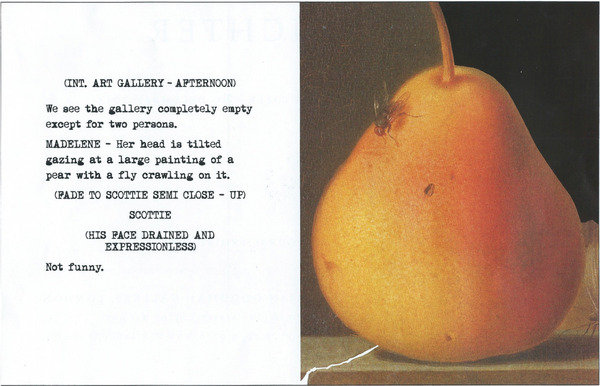 Marian Goodman Gallery, London and Galerie Marian Goodman, Paris are pleased to present two simultaneous exhibitions by John Baldessari. Pictures & Scripts, at the London gallery will present a series of new works, the artists first solo exhibition in London since his retrospective Pure Beauty at Tate Modern in 2009. Concurrently at Galerie Marian Goodman, Paris, Early Work will show for the first time a refined selection of important early works from Baldessari’s practice.

Pictures & Scripts is a series of 20 new paintings that juxtapose still images appropriated from black and white films with excerpts from fictive narrative film scripts. Removed from their original contexts, these appropriated film stills capture moments of paused action, within which selected forms have been discretely over-painted in monochrome fields. The excerpts of dialogue between unknown characters hint at conversations between art world insiders, humorously denuding the commercial arm of the art industry. The lineage of these diptychs can be traced back to Baldessari’s early experiments with text and image in the mid-1960s, wherein empty canvases were painted with statements derived from contemporary art theory, one of which, Space, 1966-68, will be presented in the Paris exhibition.

The film images in Pictures & Scripts are cropped to heighten their ambiguity, deliberately isolating iconic film roles like cowboys, gangsters and ingénues, displaced from their original dramatic context and animated with new narratives for the viewer to construct. Each painting is a diptych composed of an image and text element, the text half of each painting similarly presents a glimpse of a larger dialogue, seemingly lifted from its original context. Language and image are presented on equal ground without hierarchy, so that the essence of the work is in the intersection of the two. The arrangement of words and images has been a defining interest of Baldessari’s since the 1960s when he stated “a word could be an image or an image could be a word, they could be interchangeable’’.