The eleventh edition of the salt series features new work by Duane Linklater. Through installation, performance, film, photography, the artist studies the migration and exchange of ideas, language, and memory. 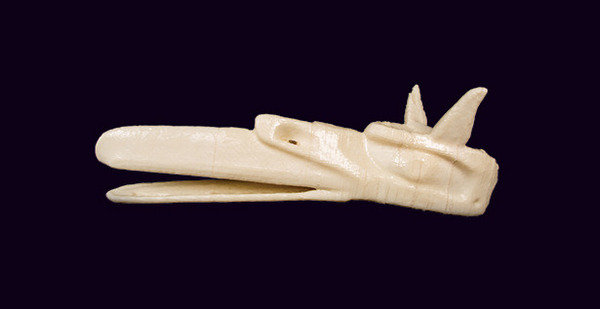 Duane Linklater addresses the ongoing legacy of colonialism in his multidisciplinary work, whether he is appropriating offensive racial slurs from Jay Z's song lyrics or calling attention to under-recognized American Indian artists. In his salt exhibition at the Utah Museum of Fine Arts (UMFA), Linklater's photographic and 3D printed copies of American Indian objects from the permanent collection make visible the complex and often unseen process of ethnographic transformation. The objects Linklater reproduced did not begin their lives as ethnographic objects. Separated from their original functional, ritual, or artistic contexts and presented in a new, museum context, the objects were transformed to embody both the specific histories that produced them as well as the global histories of Western expansion that resulted in their collection, their transfer to museums, and their new function as teaching objects. After undergoing such detachment and recontexualization, do ethnographic objects lose their original meaning and cease to be what they once were?

Linklater's copying process physically expresses the loss of information that occurs as an object transforms into an ethnographic museum object. The data that is lost in translations to new media echoes the names, stories, and meanings that are erased during an object's cultural translation in a museum. Linklater's 3D printed objects are drained of color and lack the intricate details of their originals. Similarly, his photographic copies of Navajo textiles forfeit the crisp geometry of the original designs and are instead blurred by large pixels. Linklater's copies, like their ethnographic counterparts, are dulled reminders of their original referents.

If, as artist Hito Steyerl proposes in her 2009 essay "In Defense of the Poor Image," the aesthetics of poor images symbolize the revolutionary power of rapid, grassroots, mass circulation, Linklater's objects likewise have a revolutionary message: the legacy of colonialism continues to oppress today, unrecognized by many in our pop songs, coveted fashion accessories, and educational institutions. But, rather than point a finger at a problematic past that cannot be changed, Linklater's nuanced intervention sparks a dialogue between the museum, its collection, and its audience that will continue to identify lost information while being transparent about the interpretive effects of a museum context.


Duane Linklater (Omaskêko Cree of Moose Cree First Nation; b. 1976, lives in North Bay, Ontario, CA) studies the migration and exchange of ideas, language, and memory and reveals the inconsistencies of knowledge and history through installation, performance, film, photography, and other media. He often works collaboratively and appropriates liberally, challenging modern perceptions of authorship and authenticity. Linklater has a Bachelor's degree in Fine Art and Native Studies from the University of Alberta (2005) and a Master's degree in Film and Video from the Milton Avery Graduate School of Arts at Bard College (2012). Recently, Linklater has had solo exhibitions at the Institute of Contemporary Art, Philadelphia; the Maclaren Art Centre, Barrie, Ontario; and Thunder Bay Art Gallery, Ontario. In 2012, his film Modest Livelihood, made in collaboration with Brian Jungen, debuted at Walter Phillips Gallery in Banff, Alberta, as part of dOCUMENTA (13) and has been screening across North America and Europe ever since. Linklater won the Sobey Art Award, Canada's preeminent prize for emerging artists, in 2013.