The exhibition presents around 60 pastels and felt-tipped pen drawings from a private collection, which have never been on view to the public before. 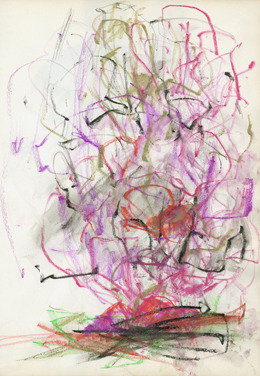 In its exhibition Joan Mitchell: The Sketchbook Drawings (27 February–31 May), Museum Folkwang presents some 60 drawings by Joan Mitchell, on public display for the first time ever.

Joan Mitchell (1925–92) was one of the greatest artists of the latter half of the 20th century. She was an important figure in American Abstract Expressionism and enjoyed close ties with artists of the New York School, such as Franz Kline, Willem de Kooning, and Jackson Pollock. In 1955 Mitchell started dividing her time between New York and Paris, before permanently settling in France in 1959. Mitchell was thus an important mediator between American gestural painting and contemporaneous artistic currents in Europe. She was best known for her large-scale oil paintings, whose subjects were freely inspired by landscape and nature.

Parallel to her many world-famous paintings, Joan Mitchell created an extensive body of works on paper. This important, but so far only rarely documented aspect of her art, lies at the heart of today’s Folkwang show. On view are around 60 pastels and felt-tip pen drawings from sketchbooks used by the artist in the late 1960s after she had moved from Paris to Vétheuil, a village on the Seine on the outskirts of Paris, where Claude Monet had lived and worked for a few years in the century before.

The majority of Mitchell’s drawings are not preparatory studies for paintings, but individual works in their own right. As in her paintings, her subjects are mostly derived from nature. In these works on paper, Mitchell drew inspiration from the immediate surroundings of Vétheuil; her gaze returning again and again to the view from her property overlooking the nearby Seine. The starting point for these freely rendered drawings is the study of nature; and their dynamic lines and overwhelmingly vibrant coloration have a visual impact that is greater than the drawings’ small format may initially suggest. The around 60 drawings in the exhibition are contrasted with one of Mitchell’s most important canvases: Mon paysage, 1967 (Fondation Maeght, St Paul de Vence). The juxtaposition between the two media perfectly illustrates the astonishing breadth of scope of gestural abstraction in Joan Mitchell’s works on paper.

Coinciding with the show, a catalogue is due for release with an introduction by Tobias Burg and a transcript of a conversation between Tobia Bezzola and Guy Bloch-Champfort, a long-time friend of the artist and an important expert on her works.