Sultan explores the boundaries of 'the photographic' and questions the role of images in the creation of identities. Joris Ghekiere presents a variety of painting techniques and styles, rather than tying himself down to just one. 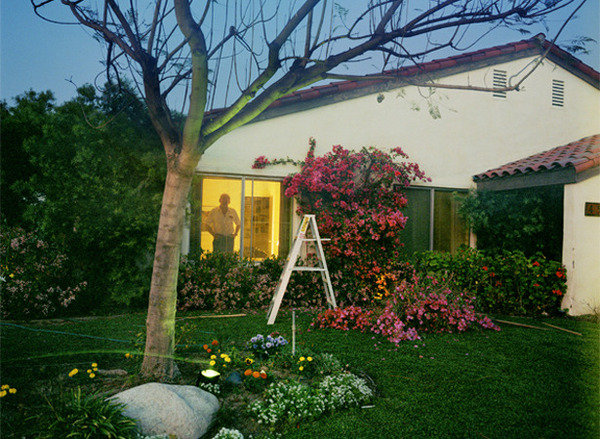 Larry Sultan (1946–2009) was one of the most important American conceptual photographers. He grew up in San Fernando Valley, Hollywood's back country, in Southern California. This region of his youth constituted a major source of inspiration for his series of photos: ‘Pictures from Home’ (1982-92), in which he portrayed his parents in their everyday surroundings, ‘The Valley’ (1996-2001), which gives us a glimpse behind the scenes on porn film sets, and ‘Homeland’ (2006-09), in which the American image of ‘the picturesque’ is confronted with the lives of Mid-American day labourers in this region marked by migration. Sultan interweaves idyllic memories of places from his youth with current socio-political topics. Because of its consistent questioning of the notion of ‘authorship’, the ‘Evidence’ series (1975-77), which he created together with Mike Mandel using images found in scientific and technological archives from the Cold War period, is considered as a turning point in the recent history of photography. Starting out from a variety of contexts, Sultan created universal, timeless and conflicting images, which reverberate in the viewer’s mind for a long time afterwards.

To accompany the S.M.A.K. exhibition, a monograph will be published in association with the Kunstmuseum in Bonn.

As a painter, Joris Ghekiere (1955, Kortrijk) occupies a highly individual and ambiguous position. He explores a variety of painting techniques and styles, rather than tying himself down to just one. His own photos and images from the internet often provide the starting point. This results in an oeuvre in which figurative depiction and abstract images interact with each other. Ghekiere is fascinated by uncomplicated, clichéd beauty: still-lifes with plants or flowers, or portraits of dolled-up ladies and suchlike. He questions this sort of beauty by means of an unusual range of colours, shades of colour that bleed into one another, negative images and distorted compositions. Beauty is subject to evolution and is, after all, ultimately transient. The circles rippling outwards that the artist often sprays on top of his images give the feeling that his paintings are variable and mobile and that several perspectives exist in parallel within a single image. Ghekiere both literally and figuratively puts beauty in a new perspective. At the same time his artistic intervention undermines the comprehensibility of his images from the inside out: clichéd beauty with no complexes is converted into a new aesthetic characterised by an impalpable complexity. And it is precisely this elusiveness that is the challenge when looking at Ghekiere’s paintings.

Like that of many Belgian painters of his generation, Joris Ghekiere’s oeuvre is in line with the form of contemporary painting that questions the nature of the image. The medium of painting itself is employed to enquire into the image both visually and in terms of its content. The exhibition at the S.M.A.K. shows work from the late 1990s to the present.

This exhibition is curated by Ulrich Loock. As an art critic and a curator working at different international institutions Loock has made contemporary painting a particular field of his expe

Opening hours
The museum is closed on Monday. Tuesday through Sunday from 10 am to 6 pm.
Closing time cash-desk: 30 minutes before closing of the museum

Entrance fees
€ 8: individual visitor
€ 6: groups up to 15 persons, 65+ years, inhabitants of Ghent.
€ 2: young people under the age of 26
For Free: for children up to and included the age of 18, disabled and persons accompanying groups. Friends of S.M.A.K., for members of VMV, ICOM. Guides and press with official pass. admission is also free for citizens of the city of Ghent every Sunday morning from 10 am to 1 pm and during the 'Gentse Feesten'.