Partitura in nero. This exhibition is unique in its presentation of the same single figure, shown repeatedly as she circles us around the room. With withdrawn body language and a pensive demeanour, the woman turns away from us or toward our own image. 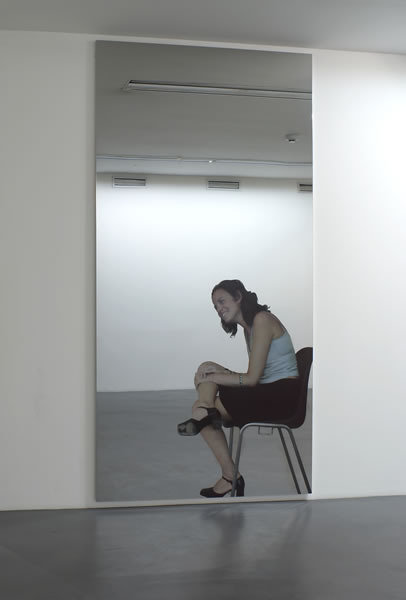 Simon Lee Gallery is proud to present an exhibition of acclaimed Italian artist Michelangelo Pistoletto, a key figure in the development of Italian art in the 1950’s and 1960’s and a founding member of the Arte Povera movement. The term meaning “poor” or “impoverished” art was coined to describe the practice of a group of Italian artists creating art who used everyday materials and found objects. Arte Povera rejected standards of artistic classification, seeking new approaches to making art and aiming to create a space for evaluation of the viewers’ responses and the art object itself. Pistoletto’s practice is profoundly driven by the belief that creative energy is linked not to the artist as a singular entity but as an extraordinary force capable of impacting every aspect of society. The role of the artist is dedicated to creating interaction between all spheres of human activity that make up society.

Pistoletto began making self-portraits in the 1950’s, using increasingly reflective surfaces and exploring the relationship between the individual human figure and anonymous spectator. This led to the production of the first of his Quadri Specchianti- Mirror Paintings in 1962, originally created by attaching figures hand painted on tissue paper, to the mirrored surfaces of highly polished stainless steel panels. The incorporation of the viewers reflected image makes the interactive and figurative exchange fundamental to the experience of the work. The mirrored surface of the work opens itself to the presence of the viewer, the presence of the whole world, and everything occurring in front of the painting. It is a changing portrait of society, pictorial space animated by the moving backdrop of the room as well as the coloured ink image which since 1973 has been directly silkscreened onto the surface.

While the mirror is instrumental to Pistoletto’s pursuit of imaginative, boundary breaking means of diversifying the nature and function of art within our social fabric, the human figure also acts as a motif for research into the objective identity of existence and spiritual need in the dynamics of everyday life. Figures are shown obliquely or from behind, addressing us if at all, indirectly and regarding us from deep within the mirror. Suggestive at times of narrative plot, solitude and human fragility, the work reflects shifting planes of reality and time and daily life on an individual level. This exhibition is unique in its presentation of the same single figure, shown repeatedly as she circles us around the room. With withdrawn body language and a pensive demeanour, the woman turns away from us or toward our own image, sometimes appearing to be walking not just out of the frame but passing into the void. Toying with roles of perspective and identification, Pistoletto welcomes an evaluation of personal identity, actively charging the act of self reflection and demanding a response from the viewer.

Time based and fluid, interaction with the works change depending on the individual viewer’s engagement, becoming less about fixed imagery than possibilities for experience. The reflective surface of the paintings pulls the viewer and surrounding space into the work, altering the fiction of the painted image as a frozen moment. An ardent advocate of the performative in art, Pistoletto‘s work emphasizes interactivity, spontaneity, the multiplicity of imaginative worlds, and an active relationship to artwork as a sculpture or painting to the immediate environment. Reflecting the surroundings and the viewer as part of the image breaks down traditional notions of figurative art in an ever changing spectacle, combining material form, pictorial space and gesture. This performative, ephemeral alliance between setting and artwork, presents situations, tensions and structures that encourages encounter between viewer and object. By fostering connectivity and insisting on the complexity of the individual and the communities that they form, the distance that separates art from life is narrowed.

Michelangelo Pistoletto (b. 1933) has exhibited extensively over the past 50 years across Europe and the USA, including a retrospective at the Philadelphia Museum of Art ‘From One to Many 1956-1974’ (2010) which travelled to MAXXI, Rome, the ‘The Mirror of Judgement’ at the Serpentine Gallery, London (2011) and Année un- le paradis sur terre, Musée du Louvre, Paris (2013). His work has been included in major international exhibitions including the Venice Biennale on eleven separate occasions, and four iterations of Documenta and can be found in many public collections, among them Tate Britain, London, Guggenheim Museum, New York, MOMA, New York, Museo d ́arte contemporanea, Castello di Rivoli, Turin, MACBA, Barcelona and MuHKa, Antwerp.