'Unfolding'. The exhibition features videos and installations, including his Letter to a Refusing Pilot, which was widely recognised at the Venice Biennale in 2013. 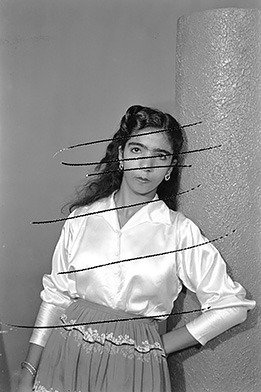 Akram Zaatari sometimes compares his artistic practice with that of an archaeologist. This exhibition features works that could all be described as a form of excavation in the city of Saida, south of Beirut in Lebanon – the city where the artist was born and raised. Zaatari is interested in the subjective writing of history. Photographic records are an essential part of that, just as letters, diaries, films and sound recordings. These are materials that Akram Zaatari uses in his work. As an artist, he works not only with the stories they tell, but also with the media and communication channels themselves. He belongs to a generation of artists who are heirs to a conceptual and media- critical art that emerged in the 1970s and 1980s, frequently with roots in photography. These artists move freely between documentation and subjectivity, between archive and Zaatamemory. These interests and artistic methods can be regarded as part of an international tendency and were described by the art historian Hal Foster as an “archival impulse”.

The founding of the Arab Image Foundation, an institution that collects, preserves, studies and spreads knowledge about photography from the Arab-speaking world and the stories that go with it, should be seen in relation to this. The Arab Image Foundation was established by Akram Zaatari together with two photographers. The foundation comprises more than 600,000 photographs, and Zaatari defines this material as a collection. If we call it an archive, it would be one of collecting practices and not photographic practices. It is a collection of vernacular photography carefully selected mostly by artists interested in working with existing documents. This renders it a double nature as a record; one that testifies on a photographic tradition and one that serves an artist’s work, says Zaatari.

One of the photographers whose images have been incorporated in the Arab Image Foundation is Hashem el Madani, who ran the portrait atelier Studio Shehrazade in Saida from the early 1950s. “ The Madani Project” is a research project pursued by Zaatari since 1999, in dialogue or negotiation with el Madani. It has generated exhibitions, publications and new works by Akram Zaatari. This undertaking would probably not have been possible had not Zaatari grown up in Saida and thus had a natural link to the world el Madani portrayed – a circumstance that paved the way for their confidential interaction. The end scene of Zaatari’s film Twenty-Eight Nights and a Poem shows the two men in Studio Shehrazade looking at a computer screen producing loud Arabic music, while the scene behind them becomes illuminated with moving light beams as during a concert. Zaatari and el Madani seem unconcerned if not unaware of the spectacle. This autonomous scene is presented entitled Endnote.

Twenty-Eight Nights and a Poem

Twenty-Eight Nights and a Poem consists partly of this film that concludes Zaatari’s comprehensive project on Studio Shehrazade. The work has many elements, including photographs, films and cabinets with pictures portraying el Madani’s studio. Rather than eulogising photography of the past, Zaatari manages to highlight how the tools, the setting and the social and economic agreements between the studio photographer and his clients provided the conditions and the framework for the pictures he produced.

In another work, the artist selected portraits by el Madani, showing shop owners in the old quarters of Saida in the late 1940s to 1950s. Zaatari identified the shops and their locations, and with the Arab Image Foundation, he was able to make the performative project Itinerary, 2008. Inside the shops, he placed framed reprints of the photographs taken by el Madani in their corresponding locations. Where the shops do not exist anymore, images were placed in the closest café. He then re-photographed the locations in the same way as in el Madani’s photographs, and asked the shop owners to stand at the door in order to take the pictures in daylight. The general public picked up a map which indicated the locations and explained who the shop owners originally were and who they are now. Zaatari does not want to replicate the problematic aspects of collecting that is integral to the history of many museums, not least institutions based on colonial plunder. So, in addition to the gesture of bringing something back, the Itinerary project comments on the de-contextualising of images.

El Madani’s photographs indirectly depict the social life of his own city. The people he photographed were clients but also his friends and acquaintances. As a studio photographer, he considered himself to be a kind of craftsman. His close friends chose other crafts to pursue – shoemaker, carpenter, or quilt maker – and in their view their occupations were not that different from his, with shops near each other and serving more or less the same customers. Akram Zaatari has expressed his fascination with the craft of photographers, whose works are later referred to as documents of an era, a society and a photographic practice at the same time. A baker makes bread like a photographer takes pictures, but bread disappears; while a former studio becomes an inevitable archive, says Zaatari.

Letter to a Refusing Pilot

One week after Israel’s invasion of Lebanon in 1982, the Israeli air force pilot Hagai Tamir was ordered to bomb a target in Saida. Being an architect, Tamir could identify the building he was to bomb as either a hospital or a school. He turned his aircraft around and dropped his bombs over the sea. The building, Saida Secondary School, was bombed a few hours later by another pilot.

Akram Zaatari often heard rumours of this event in his youth, since his father had been the headmaster of this school for 20 years. The episode was retold in different ways and embellished with explanations and additions concerning the identity of the pilot. It took on mythical proportions. Zaatari retold it himself in a public discussion with the Israeli filmmaker Avi Mograbi in Paris several decades later. The conversation was published in a book. This led to Zaatari being contacted by Seth Anziska, an American scholar who had interviewed the pilot: the rumour was true. Zaatari’s film installation consists of a 34-minute video projected opposite a smaller screen with a shorter 16-mm film loop.

The video shows the school and the schoolyard, empty and full of children and teenagers. We see aerial shots of Saida, children folding paper planes, throwing them from balconies and launching them to soar above the city – interspersed with excerpts from an Israeli army documentary commemorating the invasion. Pictures of the paper planes and the boys playing are contrasted with the fighter aircraft. The loop running through the projector shows Zaatari’s work Saida June 6, 1982 which is based on photographs he took on the first day of the Israeli invasion of Lebanon, animated to reconstruct an air raid.

Letter to a Refusing Pilot is addressed to the soldier who refused to bomb a school. The film is a tribute to a person who made an individual choice: to refuse military orders even if this refusal would not change the course of war. This is an ethical and an existential choice. The work concerns a soldier who became human; a passage that is often left out in historical narratives of war.