A certain view of art in 2015 through a glass screen. The exhibition sketches out the contours of a contemporary artistic folklore that is seizing on traditional techniques with the aim of taming new technologies. 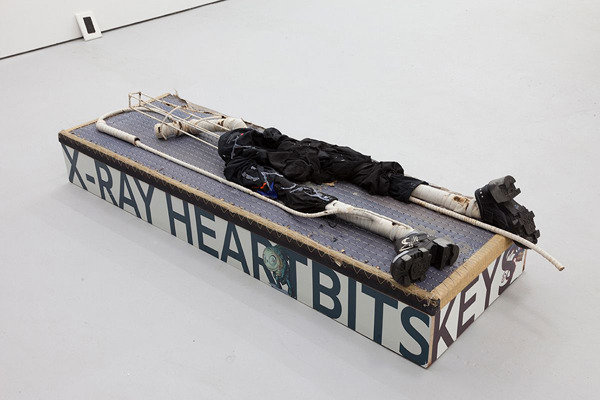 “Deep Screen” proposes an in-depth exploration of the screens that now people our lives. In ever-growing numbers, computers, smartphones and tablets constitute a filter that is starting to replace the glass doors of galleries and other museums, and modify our perception of contemporary art. The idea of continuous depth in the exhibition’s subtitle clearly echoes the spatial dimension of the featured works. The expression is also employed here as the opposite of superficiality and characterizes each of the pieces displayed in Parc Saint Léger. Far from trying to champion virtual visits, the immersive style of “Deep Screen” invites flesh-and- blood visitors to an exhibition experience that is completely of the physical world.

Since the border between the real and the virtual is increasingly porous, many artists today consider the internet, with its cycles, networks, fluids, pollution, folklore, and beliefs, as their new natural milieu. In this ecosystem, the majority of the artworks move about freely, unconstrained by lighting or how they are positioned on display, dehierarchized, “liked,” shared, occasionally imitated, and living out an uninhibited existence in their documented form.

Borrowing the display-case exhibit form from museums devoted to popular arts and traditions,* “Deep Screen” presents a certain view of art in 2015 through a glass screen. These giant vivariums make it possible to conserve works of art within their glass walls, preserve them from change, and of course show them off to advantage, raising their cultural value. “Encasing” the show and keeping visitors at a remove inevitably induces a certain critical distance vis-à-vis a digital practice that may already have a whiff of outmodedness or obsolescence.

The diaramas can be seen as narrative collages blurring the borders between the natural world and an artificial arrangement, each one including works of different kinds posed before computer “wallpaper” designed by Owen Piper. Inside, a synthetic fantasized nature dreamed up by Piero Gilardi surrounds the postapocalyptic avatars created by Renaud Jerez and the display dummies sporting clothing from the Arcangel Surfware brand designed by the artist of the same name. The two latter artists, as well as Tilman Hornig, Marlie Mul, Anne de Vries, and Rachel de Joode, weave subtle ties with Post-Internet art** and demonstrate the attraction scientific phenomena, communication tools, flows, and organic materials exercise over a young generation of artists.

We might see this collection of art works and objects from everyday life, along with the experimental methodology accompanying it, as a nonexhaustive ethnographic practice playing out at one and the same time in the thin layer of our smartphones’ screens and the depths of our memory.

“Deep Screen” sketches out the contours of a contemporary artistic folklore that is seizing on traditional techniques with the aim of taming new technologies. Laid out like a museum within a museum, the show proclaims its status as a laboratory,*** reducing the borders between a history of art in the process of being written and contemporary popular cultures.

* The Musée national des arts et traditions populaires (MNATP) is a public institution founded in Paris in 1937 by the French museologist and museum innovator Georges Henri Rivière (1897-1985). This ethnology museum offered a synthesizing view of France’s traditional rural and artisanal society for the most part, from the nineteenth century to the 1960s.

** Post-Internet art is a school of art following in the wake of the democratization of the internet starting in the mid-2000s, reflecting the current hyperconnectivity. The term was proposed by the artist and theoretician Marisa Olson in 2008, and artists like Katja Novitskova, Brad Troemel, or Artie Vierkant have been narrowing and illustrating the concept since 2010. Post-Internet art differs from Net Art of the 1990s because of its existence outside digital networks. The term Post-Internet does not refer to a time that falls after the internet age, but rather describes a practice that places the system of diffusion, appropriation, and the free circulation of documents at the heart of the artistic process.

*** Laboratory-museum, a phrase dear to Georges Henri Rivière describing the Musée national des arts et traditions populaires and illustrating one of its many specificities, i.e., bringing together the museum’s curators and a team of researchers around the task of elaborating the museum’s collections.

Founded in 2009, the artist duo It’s Our Playground is made up of Camille Le Houezec and Jocelyn Villemont. IOP productions involve exhibitions, internet projects, stage design and installations with a particularity: they use curating as an art medium. IOP engages in an uninhibited reflection on display modes, exhibition devices, and the internet’s influence on contemporary life and output.

Since 2010, the website itsourplayground.com has served as a portfolio of the duo’s activity in common, but it exists above all as an artist-run space on the internet that avoids the material constraints of a physical exhibition venue. IOP on-line projects deconstruct the hierarchy between various documents while questioning the digital presence of works of art.

From September 2012 to August 2014, IOP oversaw programing at SWG3 Gallery in Glasgow. The two artists currently live and work in Thorigny-sur-Marne.