The show brings together 30 works, both small and medium-sized works on plinths in which inflatable elements and colour play an important role. 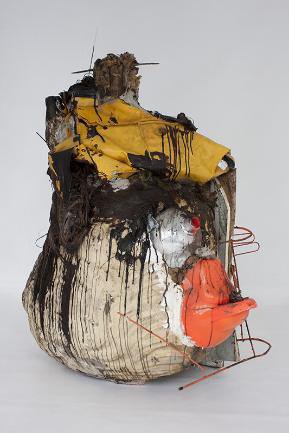 Peter Buggenhout (1963, Dendermonde) constructs sculptural installations out of industrial and found materials. At first sight, his works look like the remains of destroyed or abandoned structures. Beneath the constructions' formal complexity, however, lies a carefully developed internal logic.

Buggenhout works with what he describes as abject material: everyday objects detached from their original context and then reused. By covering many of his sculptures with dust, he attempts to neutralize any symbolic value. To Buggenhout, dust is a material without meaning, consisting only of leftovers. And yet it's capable of transforming objects by accentuating form, while colour and material fade to the background. Buggenhout makes both small compositions on plinths and monumental, freestanding sculptures and installations that fill a whole space.

This first major solo exhibition in Belgium presents a retrospective of his varied work from the late 1990s until today. The exhibition brings together works from existing series, maquettes, large dust sculptures, a series of new smaller work in display cases, and two large monumental installations.

We did it before, we will do it again
In conjunction with the exhibition, a new monograph will be published featuring numerous images both of work by Peter Buggenhout and the art and artists that influence his work (ranging from historical art to temples and the natural world). Texts by Selen Ansen and William L. Rathje, an extensive interview with M curator Eva Wittocx as well as fragments of texts written by Buggenhout himself.
Published by Jnf Editions / Editions de l'Amateur (English/French)
400 pages, 200 images, texts: French/English