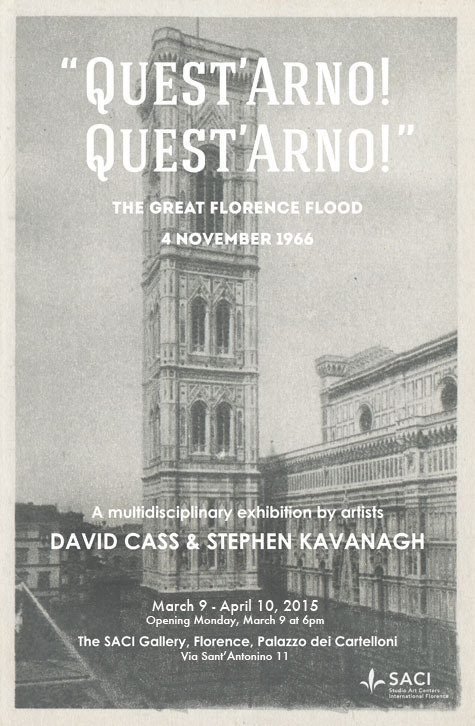 Scottish artists David Cass and Stephen Kavanagh first met in Florence, in late 2010, on a Royal Scottish Academy scholarship to the city. It was while on this scholarship that they began working together, and have exhibited regularly over the last few years. It's long been their intention to return to Florence, and this project has enabled them to do so. This exhibitions includes a series of paintings, sculptural work & drawings that explore the events of those days in early November 1966 when Florence experienced the Flood.

The artworks imagine & exaggerate scenes of inundation and destruction: the great Florence flood of November 1966. Inspired by photographic documentation — from press, postcards, residents' photographs — and from imagination, David Cass has painted scenes with antique watercolor on antique papers, card, & wood. He began creating these artworks during late 2013/early 2014: 47 years after the flood which claimed at least thirty lives in Florence itself — and dozens more in the surrounding area; which made 50,000 homeless; and damaged 14,000 works of art, plus up to 4 million books & manuscripts.

He first visited Florence in late 2010, on a Royal Scottish Academy scholarship. He has returned several times since 2010, and his artistic response to the city has gradually developed. Inspired by artist James Hogg's set of letters written from Florence during November 1966 (in Dear Eddie and Popp; Letters from the Florence Flood of ’66, edited by Mary Beckinsale, published by SACI, 2010) this series of studies is as much an attempt to introduce a new element into his practice as they are explorative responses to the history of this catastrophe.

David Cass graduated with First Class Honours from Edinburgh College of Art in 2010, receiving the Royal Scottish Academy’s John Kinross Scholarship to Florence. The RSA now holds six of his artworks in their permanent collection. Cass has spent extended periods of time working in Italy, Belgium, Spain and France. He is based in the UK, though takes frequent research trips onto mainland Europe.

His artworks have been exhibited throughout Scotland and England, and further afield too (Florence, Brussels, Barcelona, Toronto). He has pieces in private collections throughout Europe, and in Canada, America & Australia. In 2014 Cass completed a set of Artists' Residencies in Spain, as a consequence, he was invited to be part of Joya: arte + ecología as their Project Developer.

Since graduating in 2010 with a first class honors degree, Stephen Kavanagh has remained active and continuously strives to improve his practice. Exhibiting extensively across the United Kingdom has allowed him to built a positive reputation within the arts community in Scotland. Within a 4 year period Stephen has exhibited in Aberdeen, Edinburgh, Glasgow and London numerous times and is now looking to introduce his work to a European audience here in Italy.

"Place" is a strong presence within his work, the notions of memory and the perceptions of the built environment are apparent in his practice. These aspects have greatly influenced his life, leading to several research trips which have stretched across areas in Europe, Asia and North America. As a recipient of the RSA John Kinross Scholarship he was afforded the opportunity to live in Florence, experience the culture and the history. This has lead to many works being produced about the city, stemming from both his own personal experience and the history of this iconic city. Stephen's approach to his practice continuously changes in relation to the subject matter. Materials and methods are the direct result of what is needed by the projects he undertakes. Allowing him to maintain a certain amount of sensitivity, focusing on the needs of the work.

This experimental approach he strives for has created an extremely diverse portfolio of works. Although architectonic in nature, the materials and results can be worlds apart. From clear resin cast air raid shelters to steal factory shells, each holds a resonance with the original location. The materials are the direct result of the research, relatable materials and actions dictate the outcome. Currently Stephen is attending Edinburgh College of Art and is working towards obtaining his MFA degree this summer.