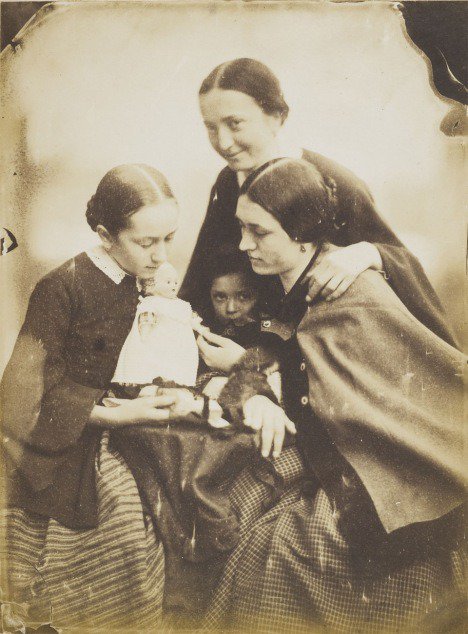 Salt and Silver: Early Photography 1840 – 1860 is the first major exhibition in Britain devoted to salt prints, the earliest form of paper photography. The exhibition features some of the rarest and best early photographs in the world, depicting daily activities and historic moments of the mid 19th century. The ninety photographs on display are among the few fragile salt prints that survive and are seldom shown in public.

In the 1840s and 50s, the salt print technique introduced a revolutionary new way of creating photographs on paper. It was invented in Britain and spread across the globe through the work of British and international photographers – artists, scientists, adventurers and entrepreneurs of their day. They captured historic moments and places with an immediacy not previously seen, from William Henry Fox Talbot’s images of a modern Paris street and Nelson’s Column under construction, to Linnaeus Tripe’s dramatic views of Puthu Mundapum, India and Auguste Salzmann’s uncanny studies of statues in Greece.

In portraiture, the faces of beloved children, celebrities, rich and poor were recorded as photographers sought to catch the human presence. Highlights include Fox Talbot’s shy and haunting photograph of his daughter Ela in 1842 to Nadar’s images of sophisticated Parisians and Roger Fenton’s shell-shocked soldiers in the Crimean war.

William Henry Fox Talbot unveiled this ground-breaking new process in 1839. He made the world’s first photographic prints by soaking paper in silver iodide salts to register a negative image which, when photographed again, created permanent paper positives. These hand-made photographs ranged in colour from sepia to violet, mulberry, terracotta, silver-grey, and charcoal-black and often had details drawn on like the swishing tail of a horse.

Still lifes, portraits, landscapes and scenes of modern life were transformed into luxurious, soft, chiaroscuro images. The bold contrasts between light and dark in the images turned sooty shadows into solid shapes. Bold contrasts between light and dark turned shadows into abstract shapes and movement was often captured as a misty blur. The camera drew attention to previously overlooked details, such as the personal outline of trees and expressive textures of fabric.

In the exciting Victorian age of modern invention and innovation, the phenomenon of salt prints was quickly replaced by new photographic processes. The exhibition shows how, for a short but significant time, the British invention of salt prints swept the world and created a new visual experience.

Organised in collaboration with the Wilson Centre for photography.

‘Salt and Silver’ - Early Photography 1840-1860 is published by Mack to coincide with the exhibition and will be accompanied by a programme of talks and events in the gallery.

Sculpture Victorious is the first major exhibition devoted to the innovative and compelling sculpture produced during Queen Victoria’s reign (1837-1901). It shows how sculpture featured in all aspects of Victorian politics, empire and industry and includes major Victorian sculptors like Francis Chantrey and Alfred Gilbert, alongside lesser-known artists such as Mary Watts and William Reynolds-Stephens.

The Victorian period was a Golden Age for British sculpture. The country had a monarch and a Consort who commissioned and encouraged sculptors, and the State, long a bystander in the encouragement of arts, commissioned a range of sculpture and decoration to ornament the new Houses of Parliament. New scientific technologies such as electrotyping were developed, and sculptors collaborated with manufacturers to create ever more elaborate silverwork, jewellery, and ceramic ornament. The grand public events, most famously The Great Exhibition of 1851 provided spectacular opportunities to showcase these productions, and demonstrate new developments in the carving of traditional materials such as wood or marble.

Throughout the period sculptors allied technical novelty to iconographic innovation, finding new subjects and compositions inspired by antiquity and the nation’s past to create works that would have startled their predecessors. These works still have the capacity to surprise us today. George Frampton’s life-size Dame Alice Owen 1897 in marble, alabaster, bronze, paint and gilding is shown alongside finely-wrought silver and exquisitely-detailed electrotypes, such as James Sherwood Westmacott’s electroplated Baron Saher de Quincy, Earl of Winchester 1854. The latter has been removed from the House of Lords for the very first time for this exhibition.

Highlights include three pieces of jewellery from The Devonshire Parure 1856 made for Lady Granville, the 6th Duke of Devonshire’s niece, to wear when she represented Queen Victoria at the coronation of Tsar Alexander II in Moscow; one of a unique pairing of large, coloured earthenware elephants manufactured for the 1889 Paris Exposition; and a Bishop’s pastoral staff in gilt metal, semi-precious stones, and enamels that is still in use today.

Other significant loans include George Gilbert Scott’s model for the tomb of Philippa of Hainault in Westminster Abbey (1850-1), and Rafaelle Monti’s breathtaking Veiled Vestal. Frederic Leighton’s An Athlete Wrestling with a Python 1877, Sir Hamo Thornycroft’s Teucer 1881 and Hylas Surprised by the Naiades exh.1837 by John Gibson from Tate’s collection are also included.

Sculpture Victorious has been organised in collaboration with the YaleCenter for British Art.

The exhibition is accompanied by a fully illustrated catalogue, published by the Center in association with Yale University Press.

Image: Jean-Baptiste Frénet, Women and girls with a doll, circa 1855 © Wilson Centre for Photography