Artists search for a forgotten soul, a safe refuge, a new relation to the body and the senses. And thus they prove the surprising spiritual correspondences between early modern art and the art of today. 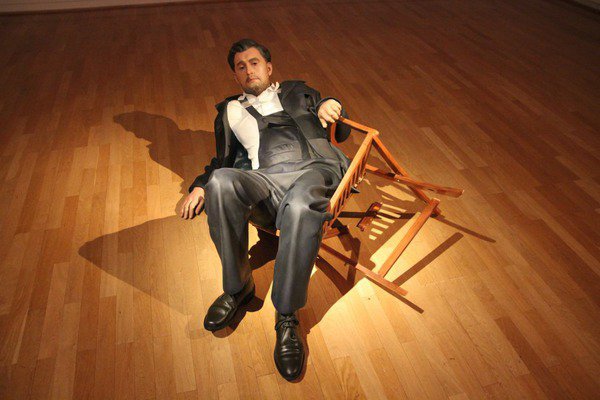 A shimmering (hidden) diamond, an artist hanging upside-down, enchanting lapis lazuli, steps that are counted for a whole week, a slowly wilting rose, and a day that passes by in 7 hours and 23 minutes. It's a feast for the senses!

Works by contemporary artists enter into a dialogue with two beautifully adorned Books of Hours. Medieval aureoles echo in the performance of William Hunt. Droplets of sweat slowly falling to the floor in Oscar Santillan's A Hymn recall Mary's suffering. Artists search for a forgotten soul, a safe refuge, a new relation to the body and the senses. And thus they prove the surprising spiritual correspondences between early modern art and the art of today.

The exhibition is curated by Ardi Poels.

Mihnea Mircan is a curator and writer. He is the artistic director of Extra City Kunsthal in Antwerp. His exhibitions included A Slowdown at the Museum and Jean-Luc Moulène Endwards. Mircan will be talking about his recent project The Allegory of the Cave Painting, which takes as its point of departure the prehistoric Bradshaw paintings, colonised – and chromatically rejuvenated – by red bacteria and black fungi. The lecture disentangles the idiosyncratic chronology of these paintings, within whose contours the past – allegorically – goes hand in hand with a radical contemporaneity. Language: English.

Francesco Stocchi is curator of modern and contemporary art at Museum Boijmans Van Beuningen in Rotterdam. His recent exhibition Brancusi, Rosso and Man Ray, in which we could view a work of art simultaneously through the artist’s and our own eyes, exemplified his interest in criticism through images. In addition to organizing exhibitions throughout Europe, Stocchi is editor of the annual magazine AGMA dedicated to exhibition making. Language: English.

Lukas Stofferis, director of the Academy for Arts and Crafts in Utrecht will introduce the medieval masters’ technique of making miniatures in all tactility and visual refinement. Due to limited availability, reservations strongly recommended before March 13: Renée Roukens

Heribert Tenschert of Antiquariat Bibermühle has a very precious book collection of illustrated manuscripts from the Middle Ages and the Renaissance in the village of Stein Am Rhein in Switzerland. The collection spans nine centuries and enjoys a worldwide reputation. Tenschert will discuss the deeper layers of the two manuscripts that are on view in Adam, Eve & the Devil. Language: German.

In The Magician (1958), the magician Albert Vogler travels around 19th-century Sweden with his theatre, entertaining his audience with predictions, hypnosis and quackery. The scientific establishment seeks to unmask his trickery of the senses, unleashing a satanic battle with reason. Language: Swedish, subtitles: Dutch.

A presentation by Ige Verslype, restorer at Rijksmuseum Amsterdam, on Johannes Vermeer's magnificent blue. Ige Verslype has restored paintings including Johannes Vermeer’s Woman Reading a Letter (1663-1664) under the auspices of an international committee of experts. In the presentation, she will highlight how Vermeer created his enchanting blue and will also disclose other unexpected details that came to light during the meticulous restoration process. Language: Dutch.

How should we interpret the typically modern positions and romantic tendencies that are re-emerging in our current thinking about society, culture and art? Timotheus Vermeulen is assistant professor at Radboud University in Nijmegen. Together with Robin van den Akker, he published Notes on Metamodernism (2010). He provides a new perspective on our times based on the new cultural logic of metamodernism. Language: English.

Since the late eighties, Jos de Gruyter and Harald Thys work as a team. Their films present homely yet estranging interiors in which stiff characters with lopsided wigs give with stammering throat sounds expression to deep fears. With a mixture of fact, fiction and repressed histories, De Gruyter and Thys open a door to new dimensions in space and time. Introduction by Ardi Poels, curator of Adam, Eve & the Devil. Language: English.

Pádraic E. Moore is a writer, art historian and curator. Currently he is a participant at the Van Eyck Academy in Maastricht. He authored the essay for the Adam, Eve & the Devil exhibition pamphlet. In his approach to art, he demonstrates a predilection for a subjective and intuitive art discourse. In his presentation, Moore will discuss different works from the exhibition and take us along intriguing side paths of art history. Language: English.

The film Synecdoche, New York (2008) is the film debut of director Charlie Kaufman, with Philip Seymour Hoffman in the lead role as the theatre director Caden Cotard. At the start of the film, his secretary Hazel buys a house that is eternally on fire. Director Kaufman comments: ‘She made the most important choice of her life here. In the scene just before she dies, she says that the ending is built into the beginning.’ Language: English, subtitles Dutch. Please note that this film will be shown at the nearby Cinema Lumière, Bogaardenstraat 40b.

Opening on the occasion of the open studios at the Jan van Eyck Academy on 5, 6, and 7 March, Adam, Eve & the Devil will be open from 5 March onwards.