An Interior That Remains an Exterior? the exhibition is bringing together eighteen international artists, many of whom are now being exhibited in Austria for the first time. 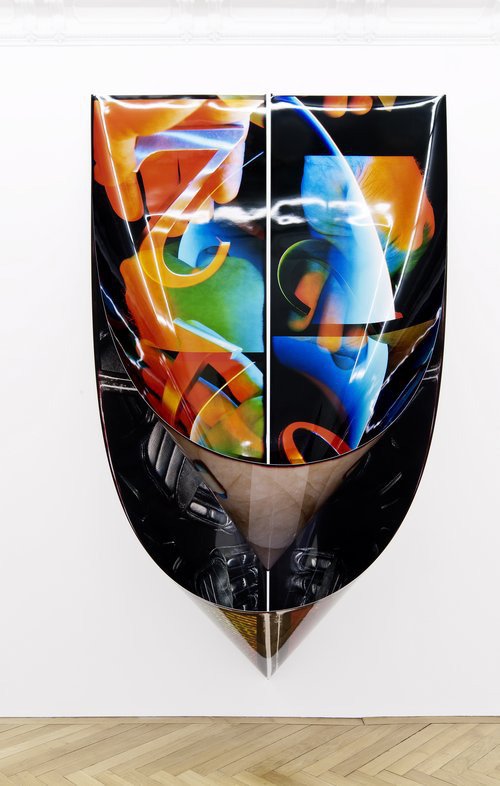 For the extensive exhibition DIDING – An Interior That Remains an Exterior? the Künstlerhaus, Halle für Kunst & Medien is bringing together eighteen international artists, many of whom are now being exhibited in Austria for the first time.

Against the background of various degrees of digital acceleration in present-day lifestyles and increasingly noticeable, latently growing political and economic tensions that in the process spill over to “things” (and people), the exhibition is seeking to present an up-to-date atmospheric picture. Digital material has long since advanced from a discrete breaking point in the 1990s to an evident state of affairs, and it not only intervenes in the present-day world of images but also in the surrounding materiality of things themselves. Although the works shown attest to a common interest in the digital, they are precisely not interested in rendering, in the sense of supposed progress, digitality as a media transfer from analogue to digital or technologies in relation to a reordering of images and their representation. The interest of the positions brought together here goes beyond the portrayal of the purely digital. The exhibition rather illustrates different structural features of the digital and its interaction with things. How do their physicality, temporality, and semantics manifest? In a rapidly changing world, objects and their referents are questioned anew in terms of their relation to reality.

A common feature of the positions brought together in the exhibition is the expression of the relationship between the digital and the analogue as well as between object and subject in relation to body and material. The essential component of temporality here is understood as a state that characterises an in-between: the exhibition proceeds from this synchronicity of the non-simultaneous in the production and representation of its “things”. The DI-gital THING becomes the circulating and difficult-to-grasp object. The art historian Kerstin Stakemaier speaks of a new subject-object relationship in which the objects become “the symptom of a ‘disconnectedness’ of the body in the present capitalist crisis.” In the exhibition DIDING – An Interior That Remains an Exterior? the curator Sandro Droschl has collected works that allude in particular to this precarious state of affairs and the increasingly pressurised concept of the object.

In the artworks the physicality of the digital is evident as particularly malleable and plays with dimensions, with recurring elements of the precarious, fluid, transparent and “flatness”. In his installation, Josh Kolbo shows the modulation of visual information, collaged, abstracted, and ultimately manifested in a process that is transferred from 2D to 3D. Here the three-dimensional remains as flat as the computer-programmed image world in Jon Rafman’s videos. The places that Rafman shows, meeting rooms, entrance halls, the dark net, the virtual and the real and their protagonists, point to the merging of bodies, with the digital material inscribing itself in physicality in various ways. As an oscillating vessel of a manifesting physical economy and its vibrating, exhausted bodies, the objects on show reveal themselves against dystopian techno-/science-fiction visions not as antagonists to human nature. Rather the traces of the digital in our bodies and in the things we have designed and used show themselves.

Alisa Baremboym’s amorphous sculptures integrate vinyl, latex tubes, polyester foil and seat-belt systems as everyday materials. The chemically insecure and fragile state of the molecules is typical of these laboratory-developed materials. Sean Raspet, too, uses amorphous materials from the environment that are characterised by the modulation from fluidity to solidity: steel, Plexiglas, hair gel. If these materials initially appear trivial, here their arrangement marks a deep-going relationship between the object and the subject, where here the non-human does not start beyond the body, but (de-)forms it in the form of chemical substances (as food, as clothing, as raw material or cosmetic product).

An Interior That Remains an Exterior? The fact that the differentiations between the analogue and the digital world have already been reified shows at the Künstlerhaus, Halle für Kunst & Medien, in particular in the aesthetic side and the approach of the artistic contributions.