The work of a younger generation of international artists originating from America, Argentina, Cuba, Denmark, Germany, Israel and Taiwan. Their work draws on a variety of sources including, romanticism, storytelling, recent and past art history, literature and landscape but always there is a direct engagement with the process of painting, often paralleled by an embracing of ornament and surface. Hernan Bas, Avner Ben-Gal, Varda Caivano, Charline von Heyl, John Korner, Dana Schutz, Suling Wang 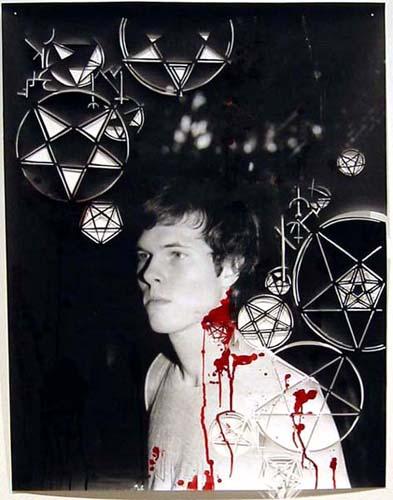 PAINTING 2004 showcases the work of a younger generation of international artists originating from America, Argentina, Cuba, Denmark, Germany, Israel and Taiwan. Their work draws on a variety of sources including, romanticism, storytelling, recent and past art history, literature and landscape but always there is a direct engagement with the process of painting, often paralleled by an embracing of ornament and surface.

HERNAN BAS, 26 is a graduate of the increasingly influential New School of Art in Miami and his work is currently on show at the 2004 Whitney Biennial. Bas's most recent paintings and drawings including Apollo and Daphne as a Boy and The Bringer of Bad News are from a series of work titled ''on the edge of elysium''. The works were made out of a desire by Bas to relate back to the era of Romanticism and to find an expanded definition for the modern day dandy. This fascination with historical painting and literature result in sensitive dynamic works that are at once familiar and fantastic.

''There is a need in me to look at figures and mythologies that inspired Wilde or Huysmans, it has become an odd method for me to analyse my own attachments to these same figures. Why does homosexuality seem to make you pre-disposed to liking these things? As a result this work is tainted with Saint Sebastian martyr types, dying dandies and peacock feathers, all the materials that dictate a certain queer vocabulary.'' Hernan Bas, 2004.

Born in Israel in 1966, AVNER BEN-GAL lives and works in New York. His work was included in Clandestine at the 50th Venice Biennale last year. The paintings included in this exhibition are part of a larger body of work which resulted from a three hour trip by the artist across the state of Mississippi two years ago. As in earlier work Ben-Gal traverses the landscape of social, physical, political order and reconfigures the possibilities of such dynamics to create a world of hyper-reality where the division of truth and fiction are distorted. In these paintings low lives, whores, transvestites and stooges, whose sexual identity is often ambiguous, are depicted in an abstracted, deserted and raw landscape.

VARDA CAIVANO was born in Buenos Aires in 1971. She moved to London in 1999 to study fine art at Goldsmiths College and will graduate this year with an MA in painting from the Royal College of Art. Caivano has shown at amongst others The Approach Gallery, MW Projects, London, and Bloomberg New Contemporaries 2001. Caivano's intimate and ephemeral paintings often take time to reveal themselves. They are executed in a precarious manner with a delicate touch and thin paint which often results in an evocation or essence of an object rather than an outright depiction.

''I see painting as a kind of precarious practice in which the painter attempts to reveal the unsayable through an engagement with the image that is not without discomfort. I find myself trying to subvert painting, resulting in paintings that reflect this ambivalence, embracing both romanticism and scepticism''. Varda Caivano, 2004.

Born in Germany in 1960 CHARLINE VON HEYL lives and works in New York. Von Heyl's paintings draw their power from the interplay of positive and negative space, the fanning out of abstraction, and the layers from which the contrasting base and object are built up. Ornamental elements rub shoulders with surfaces that have superimposed and underlying structures. The painterly process is not hidden for the benefit of a definitive end product; rather it is present and refers to the multiple, often-contradictory steps toward the discovery of an image that can never be completely revealed.

JOHN KÃ˜RNER was born in Ã…rhus, Denmark in 1967. He is an artist interested in examining how viewers respond to his painting, and often shows his work outside the usual setting of a museum or gallery. He works simultaneously with vivid colours and large empty white surfaces, where everything takes place at the margins. The motifs or ''problems'' in KÃ¸rners paintings are rooted in both the real and metaphysical worlds. Natural phenomena are often shown alongside more surreal elements with both form and content constantly transformed through repetition of motifs, which lead to new and absurd connections that are often playful and poetic.

DANA SCHUTZ was born in 1976 and lives and works in New York. Schutz's work has been described as ''teetering on the edge of tradition and innovation''. ''My paintings are loosely based on meta-narratives. The pictures float in and out of pictorial genres. Still lives become personified, portraits become events, and landscapes become constructions. I embrace the area between which the subject is composed and decomposing, formed and formless, inanimate and alive. Recently I have been making paintings of sculptural goddesses, transitory still lives, people who make things, people who are made, and people who have the ability to eat themselves. Although the paintings themselves are not specifically narrative, I often invent imaginative systems and situations to generate information. These situations usually delineate a site where making is a necessity, audiences potentially don't exist, objects transcend their function, and reality is malleable.'' Dana Schutz, 2004

SULING WANG grew up in rural Taiwan. She moved to London in 1993 and graduated with an MA in Painting from the Royal College of Art in 1999. Her work has consistently developed a contemporary approach to painting through addressing concerns about her identity and location as an artist. Her large scale canvases are characterised by sweeping stokes of colour and an attentively patterned surface. Dripping and cartoon-like in their expression her works reveal a strong association with landscape and the human form beyond the layers of abstract tangled forms.

''As a child, I spoke only one language, a language that could not be written down, and I had an understanding of the world, which was based on an oral tradition. Now I speak in a few different languages and my work has developed out of my own sense of uncertainty regarding my placement within different cultural traditions''. Suling Wang, 2004.