The artist develop a four months experimental exhibition and public program. Titled 'The Day After', it will be the first project in France and will activate a broad local and international network of collaborators and participants. 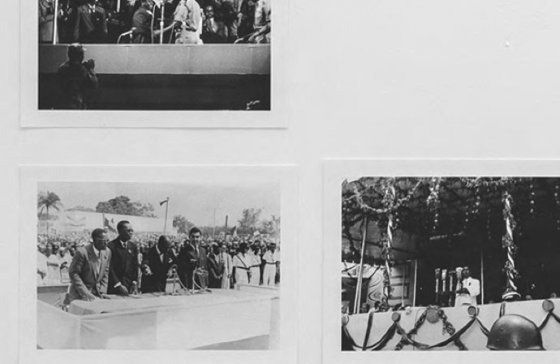 In the Spring of 2015, Bétonsalon – Centre for Art and Research welcomes artist Maryam Jafri to develop a four months experimental exhibition and public program in Paris. Titled The Day After, it will be the artist’s first project in France and will activate a broad local and international network of collaborators and participants.

The Day After takes root in Maryam Jafri’s ongoing project Independence Day 1934-1975 (2009-present), an installation composed of photographs taken on the first independence day in former European colonies across Asia and Africa, between 1934 and 1975. The photos are sourced from the countries themselves and display striking similarities despite disparate geographical and temporal origins, revealing a political model exported from Europe and in the process of being cloned throughout the world. The installation gathers images sourced from 29 Asian and African archives, juxtaposed according to a specific grid around categories of events. In her arrangement, Jafri emphasizes the generic character of the rituals and ceremonies that took place during that 24 hours twilight period when a territory transforms into a nation-state. The grid, reminiscent of both photo-conceptualism and the storyboard medium, is broken, disturbing the ideological order at play in the images and suggesting non-linear readings.

The Day After will take this rare “collection of collections” – as Maryam Jafri calls it – as a starting point to question various artistic, historical and political issues arising from these images and their historical and institutional background. What do we see when we look at the photographic depiction of an event? How is history framed by its representations? How are images and their significations affected by their context of circulation? How do visual symmetries and comparisons transform our understanding of the narratives arising from the days of independence and, by extension, the days after? And, backstage, what do conditions of access and preservation reveal about the stakes projected onto these photographs?

Conceived as a space of encounters and debates, the exhibition will serve as a terrain of investigation to map these questions through a constellation of material and immaterial contributions (workshops, seminars and performances) bringing the audience together with Maryam Jafri and a network of researchers, scholars, journalists and artists.
Au augmented version of the project will travel to Tabakalera, a new Centre for the Creation of Contemporary Culture in San Sebastian (Spain) in 2016, and will act as a case study for a transversal research program on research on research exhibition, conceived with ar/ge kunst Galerie Museum in Bolzano (Italy), in the frame of PIANO - Prepared platform for contemporary art, France - Italy.

Partners
The Day After is conceived by Bétonsalon - Centre for Art and Research and co-produced by Tabakalera, San Sebastian, Spain.

The Day After is supported by the Réseau Usage des Patrimoines Numérisés (Sorbonne Paris Cité), the Danish Arts Foundation, the Kamel Lazaar Fondation, the Ecole Supérieure d’Art et de Design Toulon Provence Méditerranée and the Service Culture de l’Université Paris Diderot. The Day After is part of is part of PIANO, Prepared Platform for Contemporary Art, France–Italy 2014-2016, initiated by d.c.a / French association for the development of centres d’art, in partnership with the Institut français in Italy, the French Embassy in Italy and the Institut français, with the support of the French Ministry of Foreign Affairs and International Development, the French Ministry of Culture and Communication and Fondazione Nuovi Mecenati.

Bétonsalon – Centre for Art and Research would like to thank Bibliothèque Kandinsky - MNAM Centre Pompidou, Bibliothèque Universitaire des Langues et Civilisations, Films Division of India and African Photography Initiative as well as all researchers and contributors to the exhibition.

About Maryam Jafri
Maryam Jafri is an artist working in video, performance and photography, with a specific interest in questioning the cultural and visual representation of history, politics and economy. Over the last years, she notably investigated the connections between food production and the production of desire (Avalon, 2011) ; the elaboration of historical narratives through a post-colonial perspective (Siege of Khartoum, 1884, 2006) ; the effects of globalization on working conditions (Global Slum, 2012) or the political stakes of food networks (Mouthfeel, 2014). Informed by a research based, interdisciplinary process, her artworks are often marked by a visual language posed between film and theatre and a series of narrative experiments oscillating between script and document, fragment and whole. The Day After is her first exhibition in France.

Solo exhibitions include Gasworks (London), Bielefelder Kunstverein (Bielefeld), Galerie Nova (Zagreb), Beirut (Cairo), the Neuer Berliner Kunstverein (Berlin), and Malmö Konst Museum (Malmö). Her work has also been been featured extensively in international group exhibitions, including at Beirut Art Center, 21er Haus (Vienna), Institute for African Studies (Moscow) and Contemporary Image Collective (Cairo); Camera Austria (Graz), Contemporary Art Gallery (Vancouver), CAFAM Biennial (Beijing), Museum of Contemporary Art North Miami (Miami) in 2014; Museum of Contemporary Art (Detroit), Mukha (Antwerp) in 2013; Manifesta 9 (Genk), Shangai Biennial and Taipei Biennial (Taipei) in 2012, among others. She was an artist-in-residence at the Delfina Foundation in London in 2014, as part of the program "The Politics of Food". In 2015, she will be part of the Belgian Pavilion at the 56th Venice Biennial. She lives and works between New York and Copenhaghen.