The exhibition explores the theme of communication in the sphere of the bed, a lieu that hosts a third of our lives. 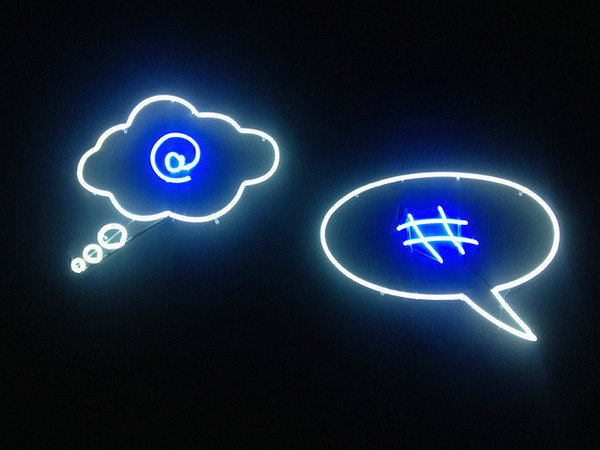 Come To Bed! explores the theme of communication in the sphere of the bed, a lieu that hosts a third of our lives. The all female show focuses on three sectors of communication that bring to play the different usages of the bed, from pillow talk, and self reflection, to technology with our need to stay connected. The installations reorient ideas of time and space, by recreating the most intimate space of all, but in a gallery. By inviting three artists to each create their own intimate environment; we bring to life questions about the individual and the way in which we occupy the space.

Performance artist Marta Jovanović’s Pillow Talk, is a long duration performance – lasting the entirety of the show, in which audience members are invited to get into bed with the artist, and have a one on one pillow talk with Jovanović about whatever their heart desires, for however long they choose. The concept alludes to the intimate secrecy that is shared during the act, but also referring to the ideas of revelation, as well as losing grip on reality. During the gallery hours when audience members are not in her bed, Jovanović continues her normal rhythm of life, working, eating, reading and watching TV in bed, all within the gallery space.

Visual artist Michelle Jaffé’s installation invites audience members to lie on her bed and put on one of three headphones that are strewn across it. The viewer is then able to hear the artist’s thoughts that have been recorded but not scripted. This installation relates to the idea of self-reflection that occurs when one is lying in bed, thinking about a specific event, person, place or thing. This drifting of thoughts that invites our unconscious to open, is the realm in which Jaffé invites the listener to learn about her. A series of paper works focusing on the sound frequencies of the recording are also on display, replicating the frenzied thoughts of the mind.

Media artist Esmeralda Kosmatopoulos’ abstract installation focuses on the theme of technology and media in the sphere of ones bed. Her installation "...No more..." entails a large human sized neon sign above the bed saying #SLEEP. It is overpowering and enveloping with its bright light preventing the individual from sleeping and referring to the constant invasive stream of social media and technology. Several other neon signs are dotted across the wall, referring to phrases and signs of our youth's popular culture, focusing mainly on communication in social media. This also refers to the new generation’s addiction to communicate through technology, in every forum and place of life.

Michelle Jaffé (b. Florida, USA) creates participatory installations that interweave sculpture, sound, and video. Jaffé was educated in Europe as a teenager, and attended University in England. Her work has been exhibited at the Beall Center for Art + Technology at UC Irvine, and UICA, Urban Institute for Contemporary Arts in Grand Rapids, Michigan. In 2012, Jaffé had a solo show at BOSI Contemporary, NY. Additional solo exhibitions have been held at Wald & Po Kim Gallery, Susan Berko-Conde Gallery, Brooklyn College, Harvestworks Digital Media, and Broadway Gallery in NY, among others. She has created site-specific installations in Long Island City, and Djerassi, CA. Since 2008, Jaffé has been a fiscally sponsored artist of the New York Foundation for the Arts, and has been awarded grants from New York State Council on the Arts, Queens Council on the Arts, and has been the recipient of residencies at the MacDowell Colony and Djerassi. Her artworks are in private collections and numerous design works are in the permanent collections of the Philadelphia Museum of Art, Fashion Institute of Technology and Museé de la Mode et du Costume in Paris.

Marta Jovanović (b. Belgrade, Serbia) constructs scenarios in which she interrogates politics, identity, beauty, and sexuality. Jovanović received her Bachelor of Arts degree from Tulane University in 2001 after attending Scuola Lorenzo de Medici, in Florence. Her works have been presented in solo and group exhibitions around the globe, in institutions such as Museo Pietro Canonica, Rome; GH12HUB, Belgrade; Location One, New York; Museo della Civiltà Romana, Rome, and Centre Culturel de Serbie, Paris, among many others. Jovanović is a winner of the Roma Capitale Award (2012) and participated at the Bronx Museum Biennial (2013) as well as the Venice Agendas at the 55th Venice Biennial along with Joan Jonas and Hans Ulrich Obrist. In January 2014 Jovanović had a first survey show of her work at BOSI Contemporary gallery in NY where she launched her first artist’s book, written by curator Kathy Battista and in affiliation with The Martiin E. Segal Theatre Center, CUNY, NY. She lives and works in New York, Belgrade, and Rome.

Esmeralda Kosmatopoulos (b. Thessaloniki, Greece) is a multi-disciplinary conceptual artist working around language and identity. Born in Greece, raised in Paris, she now lives and works in NY. Her work investigates the definition and construction of identities, personal memories, culture and collective histories in the post-Internet age. She places herself as a translator, building connections between past and present, physical and virtual and ultimately between one and another. Her work was exhibited in galleries, institutions and public spaces in North America, Europe and Latin America. Kosmatopoulos also worked alongside socially charged entities such as the Organization of American States (United States) and the Museum Louis Braille (France) to create large-scale installations that raise awareness on social issues.