Time Temple. His work examines the contact between art and social reality, considering space and time in elaborate ways. This exhibition comprises installation, painting, film, and a live theater production. 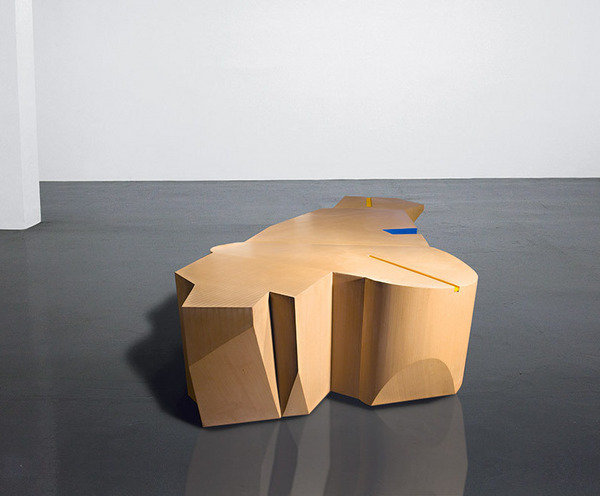 This fall the Solomon R. Guggenheim Museum presents a three-part exhibition of new work by Wang Jianwei, an influential Beijing-based artist noted for his bold conceptual practice and decades-long contributions to the Chinese avant-garde. Wang Jianwei: Time Temple is the artist’s first solo museum exhibition in the United States.

“The presentation of Time Temple is a significant step forward for the Guggenheim’s Asian Art Initiative, which has been expanding our network of relationships, our base of knowledge, and our collecting since 2006,” stated Richard Armstrong, Director of the Solomon R. Guggenheim Museum and Foundation. “Thanks to the farsighted generosity of The Robert H. N. Ho Family Foundation, and the artistic vision of Wang Jianwei, we are proud of our ongoing engagement with radical contemporary art being made in China today through this commission and those to follow.”

“Contemporary art is an important way to understand the transformation of society and culture in our time,” said Robert Y. C. Ho, chairman of The Robert H. N. Ho Family Foundation. “Chinese contemporary art is emerging rapidly and fulfills the same challenging role that contemporary art fulfills in other societies. It questions the status quo and makes people think about their world in different ways. By presenting new commissions at the Guggenheim, the Foundation hopes audiences will gain deeper insight into contemporary Chinese society and culture, and where it is heading in the future.”

About the Exhibition
Time Temple comprises an installation of painting and sculpture, a film, and a performance work in two parts.

A monumental four-panel painting highlights the installation in the Tower gallery on the second floor. At first, this painting appears to straightforwardly depict a rather quotidian meeting with men and women rendered in quasi-realist painterly style in muted tones of blues, grays, and beiges.

But a closer look reveals how the artist utilizes the four panels to explore notions of time and space. There is a repetition of individuals in the same posture, but in different frames. The images appear as sequential images, as if a camera took overlapping still shots of a single scene. Graphic yellow lines are superimposed at junctures, like rays of sunlight. The painting was conceived by the artist to reside in a specially built frame of varying depths, situating the painting in a stage-like theater setting.

However ambiguous, the four-panel painting proposes a quasi-realism that is complemented by a second painting across the gallery: a yellow-saturated abstraction of the cross-section of a cellular structure under a microscope. Through this abstraction of scientific form, the artist complicates our ideas about what is real and what is abstracted form in the world around us. Together, the two works play with perception, invite multiple interpretations, and suggest a narrow distinction vacillating between realism and abstraction. As the artist states, “It is futile to think about painting using traditional terms, such as style and color, but more important to think about painting as an interpretation of time.”

Between these two paintings, a configuration of sculptures flows from the main entry to the back of the gallery. These works are complex, polymorphic shapes that in some passages suggest the swells and crevices of the human body, and in others, the works represent fragmented, architectural geometry. The sculptures reveal the laborious production process involving the cutting and joining of many layers of wood with the addition of metal, rubber, and blue and yellow paint.

In fact, viewing the production period as a “rehearsal,” Wang Jianwei worked without a plan for how the sculptures would ultimately appear, using only a fluid daily response to the moving angles, forms, lines, and planes made the day before. The altering angles and planes of the sculptures act as records of the artist’s movements in time and space during the process of their production.

The Morning Time Disappeared, a newly produced film, will be screened in the New Media Theater throughout the exhibition period, combining the staging of filmmaking with a kind of imaginary realism, weaving abstract layers into a story inspired by Franz Kafka’s novella Die Verwandlung (The Metamorphosis, 1915). The film follows the story of a young man who moves with his family from the countryside to Beijing, filled with hopes and dreams of a better future. “One day,” as Wang Jianwei describes, “when the young man wakes up, he finds there is a fish gill on his head and a series of transformations occur to his body.” The Morning Time Disappeared explores the gap between the perception and interpretation of reality in China today, and moves between narrative and abstract passages. In his state of metamorphosis, the only thing left for the young man is time.

The live performance component of Time Temple, titled Spiral Ramp Library, focuses on the gathering and circulation of ideas within the museum space. The work takes its inspiration from American architect Frank Lloyd Wright’s design for the Guggenheim Museum and the Argentinian writer Jorge Luis Borges’s short story “La Biblioteca de Babel” (“The Library of Babel,” 1941). The first part of the two-part event calls for orators to address ten topics in a choreographed orchestra of voices and their narration, amplified throughout the Rotunda. The ten topics are: Gnosticism, library, map, universe, climate, disappearance, Jorge Luis Borges, Argentina, Frank Lloyd Wright, and the Guggenheim.

Using his characteristic process of an evolving rehearsal, the artist will use sound recordings of the first performance as a foundation for the script of the second, theater performance, which will be performed during the final week of the exhibition.

Theater is the basis for much of Wang Jianwei’s work in painting, sculpture, installation, photography, film, and time-based performance. Time Temple is no exception. Its title alludes to one of the artist’s central concerns, the question of how one thinks of and experiences time. For Wang Jianwei, time is both abstract and real, finite and potential, still and moving. It implies a state of uncertainty that can be linked to his nuanced observation of contemporary Chinese society and skepticism toward absolute ideologies.

About the Artist
Wang Jianwei is considered one of the leading artists of the reform-era avant-garde and experimental art movements in China. He is also recognized as an influential thinker and cultural catalyst in China for his writings and contributions to the public discourse on contemporary Chinese art and culture. Born in 1958 in Sichuan Province (Western China), Wang Jianwei pursued graduate studies at the Zhejiang Academy of Fine Arts (now China Academy of Art) in Hangzhou. Beginning in the early 1990s, Wang Jianwei became a pioneer of video and installation art in China, while developing a singular practice invested in increasingly elaborate multimedia productions.

Exhibition Catalogue
A fully illustrated, approximately 128-page bilingual catalogue in English and Traditional Chinese accompanies Wang Jianwei: Time Temple. The publication features two scholarly texts and one by the artist: an essay on Wang Jianwei’s practice by Thomas J. Berghuis, The Robert H. N. Ho Family Foundation Curator of Chinese Art; a look at the artist’s work in relation to contemporary art in China by art critic and theorist Gao Shiming, Director of the School of Intermedia Art, China Academy of Art, Hangzhou; and a statement by Wang Jianwei on his concept of art practice. These texts are supplemented by an extensive section of plates, detailed chronology, and selected bibliography and exhibition history. A hardback edition priced at $40 will be available in the museum shop and online at guggenheimstore.org and distributed in the United States through ARTBOOK | D.A.