The exhibition takes its title from Rhode's new experimental film, shot in his Berlin studio in collaboration with French performer Jean-Baptiste Andre. 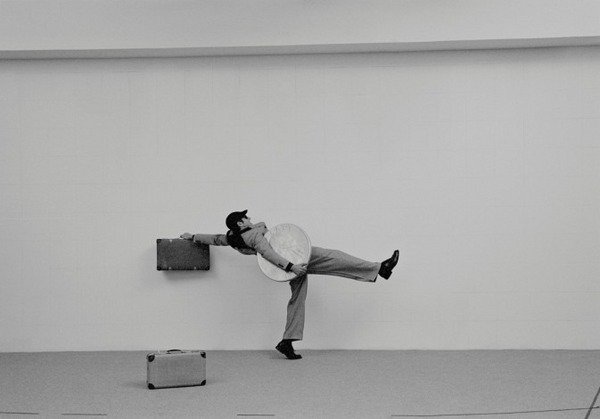 In Recycled Matter André mimes his journey through a range of wall-drawn and theatrical environments, interacting with props and sculptural elements that are remnants of previous artworks taken from Rhode's studio. Scenes of the street, rooftops and residential facades are suggested by Rhode's language of simplified and generic forms, functioning as stands-ins or representations of the real thing. Utilitarian objects such as suitcases, coins, ropes, bicycle frames and window frames inhabit these scenes, tempering André's humorous navigation through time and space by developing a life of their own - staying true to Rhode's ability to give existence to objects through the structure of animation.

The film's spatial configuration and sense of timing, delivered through André's performance and the drum-focused musical score, alongside the objects and elements we encounter, locates the viewer as a part of the film, and within its ideas about cycles and movement, journeys and navigation. Rhode explores this idea further in the second part of the gallery where, through installation, the distinctions between cinematic and worldly reality are questioned as they overlap and blur.

Part of Rhode's extended practice is his independent publishing project, Rhodeworks, which has released several publications and recordings over the years. The project maintains his continued engagement with South Africa, for example through working with Joburg hip-hop artist Sky Klinic, and publishing the illustrated book The Five Magic Pebbles & Other Stories by South African poet and author Don Mattera. A short-run vinyl pressing of the sound track to Recycled Matter, scored and directed by Rhode, will be available at the gallery as an accompanying element to his exhibition, and the opening event will include a live performance by drummer Marcel van Cleef.

Opening Hours:
Monday to Friday, 9am to 5pm, and Saturday from 10am to 1pm.