A central tenet of the exhibition is that of endurance, with works that look at the transformative potential of prolonged action. The show proposes that any approach is an imperfect act, experiment or speculation. 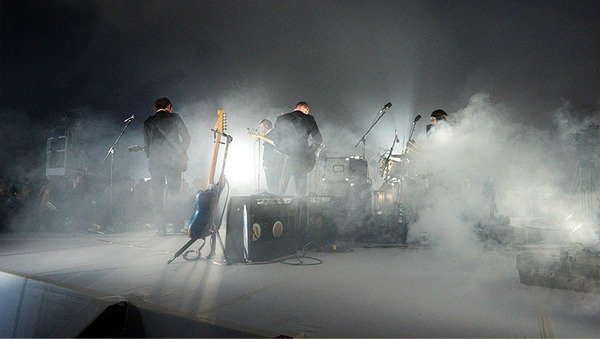 An Imprecise Science explores how with idiosyncratic intent we each determine our own processes for embodying experience or tracking life lived. Inscription of space, time and materiality, through word, gesture or abandonment of power structures creates the potential for parallel narratives to ferment and for impermanence to take precedence over authority. An Imprecise Science underscores the ways that matter becomes immaterial; bodies and forms embrace ethereality, defying gravity and rebelling against the limitations of flesh or material. Acts of precarious balance, both human and inanimate, sit alongside deconstructive play and challenges to the constitution of substance and subject. A central tenet of An Imprecise Science is that of endurance, with works that look at the transformative potential of prolonged action. The exhibition proposes that any approach is an imperfect act, experiment or speculation. Here frailty and collapse commingle with resilience and forms of material, physical and psychic ascendance.

The 13 Australian and international artists presenting work in An Imprecise Science represent a cross-generational collective, none of whom have previously shown work at Artspace. Working across installation, video, performance, sculpture, painting, sound and word, An Imprecise Science will contaminate the Gunnery building to inhabit the various spaces through which visitors pass. As artworks congeal and seep into the crevices of the building’s architecture and our mind’s eye, the aim is to prompt a reawakening of a familiar space that is at once both public and highly personal. Indeed in this assembly of approaches, boundaries between works are blurred, veiled and obscured; ordinary materials are rendered sensual while the edifices of the body and the building are debased.

T.S. Eliot wrote: ‘What we call the beginning is often the end. And to make an end is to make a beginning.’ The end is where we start from... An Imprecise Science takes pride of place as Artspace’s first exhibition for 2015.

Ideas Platform
A new initiative for 2015, visitors are now greeted at the Artspace entrance by our new Ideas Platform. Conceived as a totally adaptive program space consciously situated at the entrance to the organisation, the Ideas Platform serves as a testing ground for experimental, open-ended and expanded creative practice. It is a space for risk and speculation underpinned by the simple concept that if you have an idea, we have a platform. With a program focused on process as much as, if not more than outcome, the Ideas Platform will present a spectrum of projects from artists’ books and independent publishing initiatives, to occupations, performances, workshops, screenings, discussions and socially-engaged and collaborative practices. Artspace acknowledges the generous support of Andrew Cameron AM and Cathy Cameron for the establishment of the Ideas Platform.

LA-based artist Eve Fowler is the first to activate the Ideas Platform. Known for her provocative posters and billboard works that have used text from 20th century author Gertrude Stein, her practice challenges the viewer’s everyday experience of language and words in a public space. Fowler is an international talent, her works show at institutions such as: Museum of Modern Art, New York; Printed Matter, New York; Yerba Buena Centre for the Arts, San Francisco, and the Hammer Museum in Los Angeles.

Beginning in February 2015 Artspace relaunched the non-residential studio program as free for artists. This new initiative acknowledges both the necessity for a studio program in Sydney that offers free space for artists, and the capacity to further support artists by leveraging important professional development opportunities through curatorial advocacy. This program lays the foundations for a more dynamic relationship between artists and Artspace programs and networks. Over six years, Artspace will engage 42 artists across different generations and art forms to undertake one-year residencies. This initiative places access, generosity and experimentation at the core of Artspace’s programming and operational activities. With its focus on curatorial advocacy, Artspace connects artists and audiences with vital national and international discourses. The inaugural One Year Studio Artists for 2015 include: Khadim Ali, Hany Armanious, Kelly Doley, Nick Dorey, Mikala Dwyer, Clare Milledge and Tim Silver.

Also launching this year, the International Visitors program, presented in partnership with UNSW | Art & Design, connects Australian artists with international networks to provide a critical context and space for the creation of new work.