The show will include early paintings of rocks and trees in the landscape, paintings of plants and gourds in the studio, and works from a series of male nude studies. 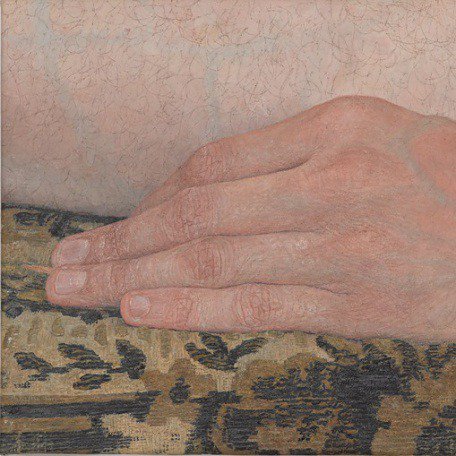 This spring MK Gallery presents the first solo exhibition in a UK public gallery of paintings by Ellen Altfest (born New York City, 1970). The exhibition will include early paintings of rocks and trees in the landscape, paintings of plants and gourds in the studio, and works from a series of male nude studies that Altfest first began in 2006.

Altfest’s work calls to mind the precise naturalism of early Lucian Freud, and finds affinities in others who painted from life such as Georgia O’Keeffe and Stanley Spencer, but she has developed her own distinct approach to figurative and representational painting since graduating with an MFA from Yale University School of Art in 1997. In Milton Keynes, Altfest will be showing almost twenty oil paintings from 1998 to the present, including three new works.

Altfest’s small-scale oil-paintings are painstakingly executed and drawn from life and realised over a long period of time. Compositionally, images are tightly cropped and framed. Folds of skin, tufts of hair and surfaces of bark are deeply scrutinized and rendered in exquisite, almost excessive, detail so that the subjects can appear both familiar and unfamiliar. But, as observed by American art historian and poet Barry Schwabsky, Altfest’s work is perhaps best considered as being ‘image-based’, rather than representational in the sense of the Western art tradition that developed from the Renaissance.

Altfest titles all her works with a blunt descriptiveness: Gourds, Armpit, Two Logs, Green Plant, Penis, The Hand, and Torso, for example. When painting the human body, Altfest frequently represents hirsute male models. In their immensely topographic detail, these images oscillate between desire and detachment. In Penis (2006), every strand of the model’s hair and folds of the scrotum are depicted with the same immeasurable care as each tangled stem or stalk of an uprooted tumbleweed. Altfest has commented that ‘The paintings of men seem to have an inverse relationship to still life, with the men becoming less like human subjects and more like still life objects.’

The exhibition will be accompanied by a range of related events, including an opportunity to hear the artist In Conversation, and a publication containing texts by Ellen Altfest, Barry Schwabsky, Linda Nochlin and Morgan Falconer amongst others.