Memory of the Victory

In the Front hall of the Armoury Chamber, a show dedicated to the 70th Anniversary of the Victory in the Great Patriotic War, represents orders and medals of the USSR from the collection of the Moscow Kremlin Museums. 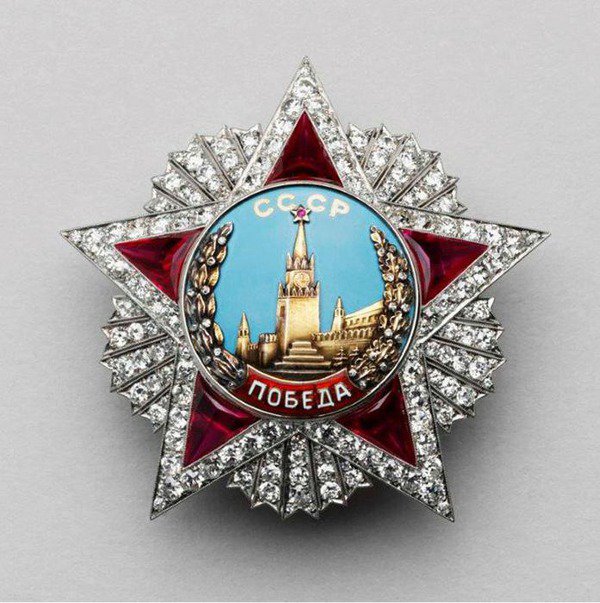 The exhibition in the Front hall of the Armoury Chamber, dedicated to the 70th Anniversary of the Victory in the Great Patriotic War, represents orders and medals of the USSR from the collection of the Moscow Kremlin Museums. The awards were conferred on soldiers, seamen and officers for outstanding heroism; generals and admirals - for skillful generalship; and rear workers - for selfless labour during the Great Patriotic War. Every decoration is a symbol of the united national feat in the most difficult years of Russian history.

During the first stage of the war the Russian forces were retreating and resisting the Hitlerite Germany, that has occupied the most European part of the USSR. At that period decorations of the pre-war years were presented for heroism on the battlefield. They are the Orders of the Red Banner and the Red Star, the medals “For courage” and “For Battle Merit”. Also the title Hero of the Soviet Union along with the order of Lenin and “the Gold Star” medal were conferred on the excelled.

The idea of the establishment of the new decorations, which would meet the reality of the cruel war, arose in spring 1942. The Order of the Patriotic War (two classes) was established in May, and June 1942 marked the creation of the legendary commanders' orders of Suvorov (three classes), Kutuzov (three classes) and Alexander Nevsky.

New decorations were appearing as the Russian army was moving to the West and the county’s territory was being liberated from the Nazi invaders. The new awards included the Order of Bogdan Khmelnitsky (three classes), established by the decree of October 10, 1943 during the liberation of Ukraine. This is the only commander’s order the third class of which could be awarded to private soldiers and partisans.

Two indicative orders – of Victory and of Glory (three classes) - supplemented the list of decorations on November 8, 1943.

The Order of Victory is the most expensive decoration in the world. It’s also the most rare, as is was presented only 19 times in the history. The order is made of platinum and gold and adorned with diamonds and rubies. The orders displayed at the exhibition were awarded for successful combat operations to the most prominent Soviet commanders: A. Antonov, L. Govorov, I. Konev, K. Meretskov, K. Rokossovsky, I. Stalin and F. Tolbukhin. There is no other museum collection in the world acquiring such a number of the Victory orders.

The Order of Glory is the successor to the legendary soldier’s decoration - the Cross of Saint George. Orange and black colors of St. George’s ribbon, symbolizing fire and gunpowder, have become a symbol of the heroic sacrifice of the Soviet soldiers’ and officers’ valour. These very colors were placed on the mount of the Order of Glory in 1943, and of the medal "For the Victory Over Germany in the Great Patriotic War" in 1945.

The navy orders of Ushakov (two classes) and Nakhimov (two classes) were established on March 3, 1944 - at a final stage of the Great Patriotic War. They were made of precious metals as well as the commander’s orders.

The selfless labour during the war years was noted by conferring of the title of Hero of Socialist Labour, as well of the Order of Lenin and medals "For Distinguished Labour", "For Labour Valour" and "For Valiant Labour in the Great Patriotic War 1941–1945 ". Fighters of guerilla groups were awarded with the medal "Partisan of the Patriotic war" (two classes).

It's for the first time, that the unique original documents related to the awarding of the first person of the Soviet state, Iosif Stalin, are exhibited. They include the diploma of the Presidium of the Supreme Soviet of the USSR "On conferring the military rank of Marshal of the USSR with the award of the decoration "The marshal's star" and "On conferring the military rank of Generalissimo of the USSR”, as well as his award diplomas and order certificates.

The orders and medals, presented at the exhibition, reflected the feat of the Soviet people at the front and in the rear.