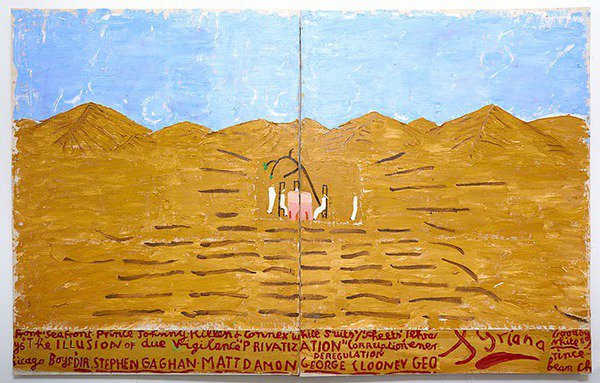 Union gallery is delighted to present Yellow Desert Paintings, an exhibition of recent work by British painter Rose Wylie. ‘Yellow Desert Paintings’ is a choice title for the work on display – collectively. There is significant yellow coverage in ‘Ray's Yellow Plane’ and ochre-desert engulfs pristine white figures in two of the four paintings. ‘P.C Head with Wooden Frame, (Pale)’ is dwarfed by the three large canvases hanging on opposite walls - you could say deserted.

This smaller work by Wylie is not to say it is less significant; the head signifies status, or celebrity overseer. P.C, after all, is used here as the initials of popular film actress Penelope Cruz. The slightness allows every part of the painting to be considered, and at once the profile keeps the viewer and the larger works in check.

This head was originally intended for the border of a larger painting 'Sitting on a Bench with Border' 2007, (Volver, 2006 Dir. Pedro Almodóvar) a border made up of several P.C heads, like frames from a roll of film. Wylie explains that this particular head didn’t necessarily fit with the larger work yet had a “metaphysical quality” consequently deciding to isolate it from the other 16 heads and reward it with its own unique wooden border (albeit an impasto oil paint one).

The defining theme throughout all the works on display is their derivation from Wylie’s love of film and the cinematic. For many years Wylie has dedicated canvases to (her own) memorable moments in film and these make up the ‘Film Notes Series’.

Wylie does not work from photographs or directly from the screen, instead she keeps a moment in her mind’s eye and works from memory. Sometimes drawing up such a list of attributes. We know that ‘film’ consists of frames per second, usually 24, but if you are Peter Jackson it can be 48, each isolated, is an image repeated, yet in motion we get the magic of film.

Wylie often repeats paintings again and again, varying each one slightly, cutting something out, sticking something down, changing a colour, a size or position of a character. In seclusion you would be forgiven for thinking it is the same painting, yet each varying quality is as important as any movies zoom, tracking or counter-shot, all which add drama, suspense or exhilaration to a work.

We get a definite sense of the cinematic through the two largest works on show ‘Pink Tablecloth, Close-Up and Pink Tablecoth, Long-Shot’ as their titles suggests these typically massive works mimic the use of camera zoom. Appropriated from the movie ‘Syriana’ (2005, Dir. Stephen Gaghan) these two paintings hang opposite each other, one cannot see both pictures at once, instead the viewer must turn their body left or right (zooming in or zooming out). Rose Wylie explains
“This memorable/surreal shot of white-dressed Arabs, sitting on improbable high-backed Jacobean chairs at a pink tablecloth with a fake tree, in the middle of the desert.

The far/close, flash-flash film shot technique is physically mimicked by the paintings if you look quickly from Long-Shot to Close-Up; and the written info at the bottom of both paintings reference film credits, and also traditional votive painting.” As votive paintings may offer thanks to God or a saint, Wylie’s paintings rather; give grace to the phenomenon that is cinema itself.

The Yellow of the exhibition comes in the form of the paired down and hilariously proportioned Rays Yellow Plane (Film: Rosalie Goes Shopping, 1989 Dir. Percy Adlon). Inspired by the “brilliant photography and the use of a yellow crop-spraying plane, as a symbol for the bonus of cleverly manipulated money-transactions”. This canvas literally soars between the two desertscapes, creating a synergy between all of the works.

Liam Scully is an artist based in London.