In sculptures, paintings, and drawings, Therrien continuously recycles and recasts his canon of common objects and images to create new enigmas. 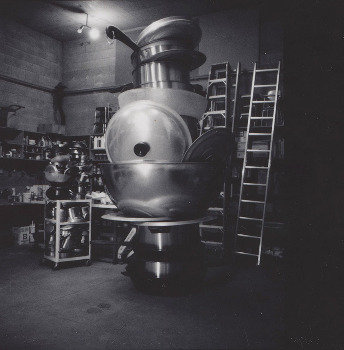 Gagosian London is pleased to present an exhibition of three sculptures by Robert Therrien.

Therrien's work has clear links to the generation of Pop and Conceptual artists that preceded him, while attesting to his affinities for folk culture, cartoons, and American design. Working in two and three dimensions with great attention to the effects of scale, he transforms elements from the culture of everyday life into artworks that evoke classical archetypes. Given its evident concern with childhood narratives, his art invites psychological interpretation while remaining firmly objective due to its uncanny proximity to the real, and its relationship with the minimal. No title (Table leg) (1993) was a significant breakthrough, marking a shift from less representational works. This was followed by Under the Table (1994), an enormous wooden kitchen table and chair set, which further defined this pivotal moment in his development. By recreating everyday objects with veracity but on a giant scale, he dramatically altered the relationship of viewer to artwork.

In sculptures, paintings, and drawings, Therrien continuously recycles and recasts his canon of common objects and images to create new enigmas. Here, variations on three of these persistent motifs—stacked pots and pans, double-hung “Dutch” doors, and oval serving trays—comprise a puzzling domestic scenario. In No title (Pots and pans II) (2008), twenty-five dramatically enlarged pots, pans, and lids are stacked into a teetering tower almost three meters high. Although the extraordinary scale of each element is immediately obvious, the perfect replication of their handles and metallic sheen prolongs the illusion. No title (Black Dutch door) (1993–2013), a monochromatic abstraction of a farmhouse staple, evokes Minimalist tropes in its binary division of space, while also memorializing a defining feature of Therrien's childhood home. No title (Black oval) (1980–2012) is a serving platter whose interior is filled with black enamel: an intermediate void—at once useless tableware, dark mirror, and non-representational painting. By reimagining the possibilities of the readymade, Therrien continues to render the familiar uncanny.