Punk. Its traces in Contemporary Art

This exhibition attempts to echo the important presence of Punk as an attitude and as a reference for many creators. So much so, that this influence might well be the only point in common between very distant artists and works. 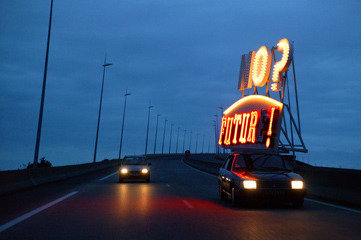 Between 1976 and 1978, in London a New York, Punk appeared as an explosion: a few bands, converging around fanzines, fashion shops or music venues, which were showing their opposition to the conventionalism of the music industry, fashion, and the socio-political contexts by making refusal, noise, lack of responsibility and speed their leitmotiv. Punk appeared as a reaction to the crisis of the hippie dream (a mirror image of the crisis of Modernity itself); entangled in the rising of terror and terrorism as political action; in check by the economic crisis linked to the management of scarcity (of oil) which had brought along the end of the dream of progress and a generation consigned to unemployment; all of this spiced up with the return of political conservatism, signaled by the appearance of Thatcherism and Reagan. Punk manifested a furious dissatisfaction with a no-future situation, which soon caught on and expanded geographically. In Spain, it appeared soon afterwards in the burgeoning bands from the "movida madrileña" and in the more industrialized areas (mainly the Basque Country and Catalonia), amidst a generation which was already had already lost the impetus of the democratic illusion of anti-Franco struggle. But Punk is only the high point, an explosion where one can hear echoes from Dada or Situationism, of a shared feeling, a malaise, anger, dissatisfaction and a fury common throughout the whole of the 20th Century. A fury whose echo is still present today.

Both Punk and its genealogy and precedents have been subject to study and analysis. In "Lipstick Traces", the most significant and iconic essay on its repercussions, Greil Marcus traced, for the first time, an itinerary through the antecedents of Punk. This exhibition pretends to do the opposite: to iterate through its influence in current art, that is, to establish a genealogy up to today, or, in Greil Marcus' words, to follow its traces to the present. “PUNK. Its Traces in Contemporary Art" attempts to echo the important presence of Punk as an attitude and as a reference for many creators. So much so, that this influence might well be the only point in common between very distant artists and works; or so much so that one can trace contemporary art as a space of dissidence where to congregate a Punk attitude.

Aspects such as dissatisfaction, non-conformism, loss of faith in progress, or fierce critique of the icons of the economic and social system, seem intrinsic to the practice of many artists. In the exhibition, Punk appears as an explicit reference in many artists: in the use of elements such as noise, cut-out typography, anti-design, and intentional ugliness; or by including explicit musical references to punk bands. But what is also shown is the trace of Punk as an attitude: the refusal, opposition and destruction; the do-it-yourself; the reference to fear and terror in a society which alienates individuals; that very alienation which causes states of psychosis; valuing whatever escapes the norm; nihilism; criticism of the economic system and anarchy; or the reclamation of one's own sexual freedom, of the body as a battleground.

Noise, refusal, violence, destruction, alienation, anarchy, nihilism and sexuality form different subject-matter areas within the exhibition, and are accompanied by references to bands, texts, music, and some iconic works. In this manner, it reflects the multiplicity of ideas, aspects and themes that articulate the Punk attitude in contemporary art. And, inevitably, "PUNK. Its Traces in Contemporary Art" is an exhibition full of noise which is explicit, but is also present in the sum total of images and in contemporary art production's will to break down hierarchies, by mixing large installations, documentary traces, unique pieces, multiples, photographs, videos, painting. Finally, as proof of the antecedents and the history of Punk, the exhibition includes a diagram which shows both its origins and its traces up until the present.