For the glass octagon of the Pavillon, Neil Beloufa has constructed a series of sculptural works that frame the space at its borders and thereby extend. Gretchen Bender presents multi-channel video work Total Recall is immediately suggestive of Paul Verhoeven's Blockbuster movie. 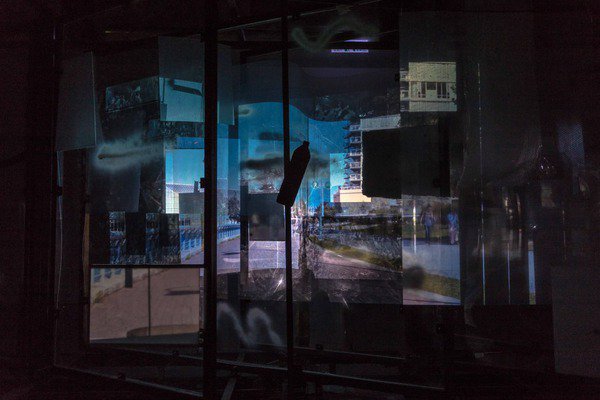 Neïl Beloufa’s work Superlatives and Resolution, People Passion, Movement and Life from 2014 is a kinetic sculpture that integrates and refracts a fragmented video onto its moving panels. As the sculpture expands and contracts along its steel tracks within the octagonal space of the Schinkel Pavillon, the video unfolds a narrative that travels across a series of staged interviews. The interviewees, everyday people of youth and health, exalt an unnamed city by describing its merits, such as the different kinds of natural waters that offer the ideal alchemy for recreational sports. The interviews outline a sort of 21st century mythology of a utopia with an ideal work-life balance structured around power naps. Including a dislocated Nico singing about All Tomorrow’s Parties in the background.

Beloufa has described the status of a work of art as an intermediary object – within its relationship to space and viewer, but in this case also as sculpture as well as projection surface. The viewer’s approach is necessarily one of a negotiation between figure and ground, without knowing which part to prioritise, assuming that these two fields could be clearly identified. While the video footage sports the gleam of a hyper-simulated HD-file in bubble-gum wrapping, the sculptural components of Beloufa’s work exhibit a strong handmade, studio-based aesthetic with rough cuts of cheap materials attached to the heavy metal framework. The autonomy of this material and aesthetic endeavour contrasts any notion of a smooth and seamless professionalisation of sculptural production.

Diffracted, rejected, deflected across the multiple Plexiglas screen layers, the RGB light from the projector is forced into a clumsy form of a home-made hologram that nonetheless fascinates and magnetises. Although Beloufa’s work can be viewed in the context of a tradition of Expanded Cinema and experimental filmmaking, its formal materiality develops a potency that does not seem to be derivative in any sense. Neither does the trope of fictionalised documentary enter the realm of cynical commentary. Instead, even the evocation of something as disturbing as the word “lifestyle” seems to resonate with a sincere fascination with ideas of modernism as well as ancient tropes of good living.

For the glass octagon of the Schinkel Pavillon, Beloufa has also constructed a series of sculptural works that frame the space at its borders and thereby extend the expanded sculptural realm to envelop the viewer gazing into and out of the bubble. As visitors we become liminal parts of Beloufa’s twinkling utopia in its etymological sense: as non-place.

The title of Gretchen Bender’s multi-channel video work Total Recall is immediately suggestive of Paul Verhoeven’s Blockbuster movie of the same name, an adaptation of Philip K. Dick’s science-fiction tale about memory and technology “We Can Remember It for You Wholesale” from 1966. It is, however, a fittingly inverted pre-emptive borrowing by Bender, used in 1987 for the first exhibition of the work at The Kitchen in New York, three years before the movie was released in 1990. The Schinkel Pavillon presents the monumental work by American artist Bender (1951-2004) in Berlin for the first time.

Bender had strong connections to the Pictures Generation artists, but in her work made use of a form of free-flowing dislocation of images and text, regulating flows of data in a way that anticipated a digital approach much more than one of Appropriation. Her work has only recently been re-evaluated in light of a recognition of her pioneering role. The exhibition allows a unique visual channel into the radical transitions of the 1980s, which – as in Bender’s work – become apparent as the prelude of the coming media revolution of the digital.

Total Recall assembles twenty-four stacked TV monitors and three projection screens that blast out an eighteen-minute performance of moving images. Footage sourced from television and movies is edited to a rapid beat alongside a montage of TV commercials for consumer recording devices, played forward, in reverse and in slow motion, in which General Electric machines are presented to be at the heart of feigned familial intimacy. Abstract computer graphics – state-of-the art programming for the time – pulsate through the installation. Animated and morphing corporate logos, movie titles in all caps and Helvetica font, and the black void of intermittently inactive displays form the body of what Bender described as “electronic theatre.” For the electronic soundtrack of Total Recall Bender commissioned the New York-based musician Stuart Argabright. The computer graphics were programmed in collaboration with Amber Denker, who had also co-designed the revolutionary digital animations for “Music Non Stop” by Kraftwerk.

Bender often adopted titles of upcoming movies in her work: in Total Recall, THE SHINING, CANDYLAND, FULL METAL JACKET, NO END, TEEN WOLF 2 – all of which scheduled for release in 1987 – flash across the screens in white lettering. Bender was not trying to nostalgically reference mainstream entertainment. Rather, she was interested in the rapid fire of anticipation, predetermination, release, and sedimentation of mass media products, of the industry (i.e. Hollywood), the network (i.e. TV), of the seamless politics of entertainment and a corporate logic of instrumentalised desire. Bender used and manipulated some of the first computer animated corporate logos that had been produced for GE, CBS, NBC, or the rotating globe of AT&T.

Bender was born in 1951 in Seaford, Delaware, USA. She moved to New York’s East Village in 1978 and befriended artists such as Robert Longo, Richard Prince, and Cindy Sherman. Bender started using television imagery in her work in 1982 and taught herself to edit video. She consequently started collecting and using the most advanced video and digital technology available to her. Although Bender was very early in her use of TV footage and digital animation, she is only recently being recognised for her pioneering role.