Combining photography with performance, personal identity with global politics, and satire with farce, Tseng Kwong Chi (1950-1990) created a compelling body of work whose complexity is belied by its humor and grace. 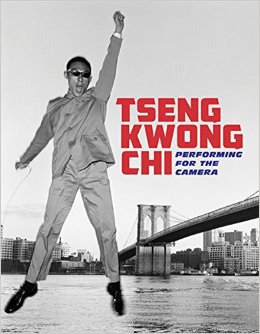 Combining photography with performance, personal identity with global politics, and satire with farce, Tseng Kwong Chi (1950–1990) created a compelling body of work whose complexity is belied by its humor and grace. Born in Hong Kong, raised in Vancouver, and educated in Paris, Tseng moved to New York in 1978, where he quickly became a key documentarian of Manhattan's vibrant downtown scene. He also began crafting the performative self-portraits—"selfies" avant la lettre—that form the backbone of his artistic practice, exploring the questions of personal and political identity that preoccupied many artists of his generation. Remarkably, Tseng made virtually all the works on view here in the course of just ten years, before his untimely death from AIDS–related complications at the age of 39.

In his self-portraits, Tseng adopts the identity of a Chinese government official, wearing a deadpan expression and a Zhongshan suit, often called a "Mao suit" after Communist leader Mao Zedong. Assuming the role of a dignitary crisscrossing the globe, the artist poses before popular tourist sites, such as the Brooklyn Bridge or Eiffel Tower, or in magnificent natural settings such as the Canadian Rockies and the Grand Canyon. Sometimes working on assignment for publications in the U.S. or abroad, Tseng captured the New York art world as well as the nation's political temperature. He was an enthusiastic and reliable witness to his time, documenting not only the work of his friend Keith Haring—from Haring's subversive and transient subway drawings to his public murals—but also the electric downtown nightlife of New York in the 1980s.

The exhibition's subtitle, Performing for the Camera, points to the masquerade and theatricality at the root of Tseng's conceptual photography. Performance allowed Tseng to maneuver like a chameleon, insinuating himself with equal poise into nightclubs, art openings, beach parties, and posh society galas. Yet in nearly every photograph of these encounters, Tseng's unchanging costume and Asian identity mark him as an outsider. Exemplifying the complexity of "East meets West," Tseng's work illuminates the eclectic practices of this fascinating period, when artists mixed personal politics, public display, and social disruption to break down barriers between various media and reinvent performance art.