For the exhibition the gallery will become a space for cross-pollination, symbiosis and infestation, uncovering intriguing connections and contradictions between a group of international artists and their artworks. 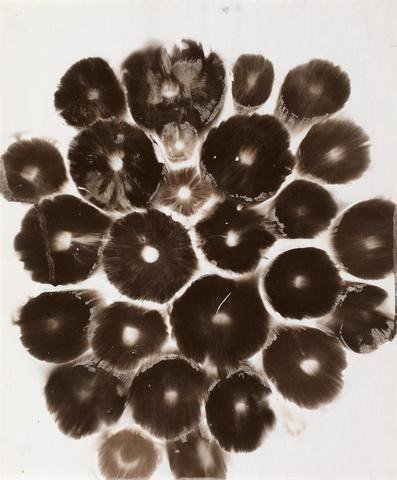 A Breathcrystal is concerned with ideas around contamination. The gallery will become a space for cross-pollination, symbiosis and infestation, uncovering intriguing connections and contradictions between a group of international artists and their artworks.

The exhibition will include works by a number of international artists, and is brought to you by guest curator Mihnea Mircan as an extension of his earlier project Allegory of the Cave Painting for Extra City Kunsthal in 2014.

The project was originally inspired by ancient Australian rock drawings – the Gwion Gwion/ Bradshaw paintings. A set of vividly pigmented cave drawings perpetually regenerated by a fungus that inhabits them, causing them to resist conventional dating protocols for thousands of years.

An archaeological study found that the enduring colour of these prehistoric representations is due to the fact that the painted surface has been fully colonized by the fungus. An acid component released by their photosynthesis etches the pictures deeper into the rock wall activating a process of permanent rejuvenation, rendering the Gwion Gwion images as ‘living pigments’.

By conventional standards, such paintings would be considered contaminated yet, in this instance infestation carries new meaning. Bacteria reproduce the paintings and warp the timeline of their existence – probably made 40,000 years ago, but also remaking again now and into the future through the process of contamination.

Life and art, sculpture and painting, the interiority and exteriority of the body, colonialism and modernist emancipation, ritual and scientific observations, prehistory and modernity – the artistic projects brought together in A Breathcrystal purposefully blur these distinctions, cross-breed categories and produce hybrid forms of reality.