She in Four Acts. Paintings, installations and performances. Ogland's impassioned interest in theatre and film as art forms serves as an important theme throughout the exhibition. 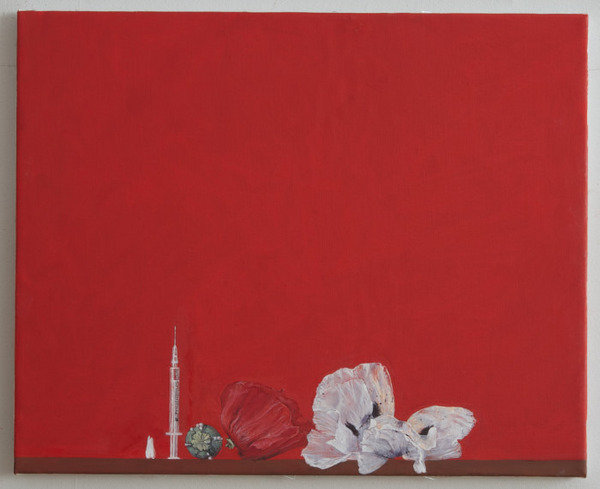 In the exhibition She in Four Acts, Ylva Ogland transforms the entire Bonniers Konsthall into a work of art with paintings, installations and performances. Ogland's impassioned interest in theatre and film as art forms serves as an important theme throughout the exhibition. With a strong ritualistic element, the exhibition surrounds the major events constituting our lives.

Ylva Ogland is one of the most acclaimed Swedish artists of her generation. From a very early age she has developed her unique artistic language, delving into the entire register offered by painting. To Ogland, painting is both a language in and of itself, as well as a state in which she creates quickly and confidently, without sketching or relying on assistance from devices such as projections. She surrounds herself with and regularly returns to her motifs, which consist of personal mythologies rooted in her individual life experiences. Her paintings often include installation elements and ritualistic performances, as she processes such subjects as memory, death and different states of consciousness, while also addressing the boundaries between art and reality. She in Four Acts is her most extensive solo exhibition to date.

In the exhibition She in Four Acts, Ogland utilizes both the platform and history of theatre, as well as the relationship between film and theatre. The four acts form a story that gradually unfolds. Each and every act is introduced by a pink painting of a curtain with a hole cut out of the canvas, serving as a passage between various states. The acts continue with sceneries in shifting colour scales through which Ogland leads the viewer between "the shadow world," "death," "birth," and "the real world."

The performative, ritual aspect of Ylva Ogland's work derives from her choice of painting as her mode of expression. Her paintings expand into the world and become part of rituals and performances. Certain objects recur, such as the candle, the poppy, the heroin syringe and the mirror. Ogland frequently uses reiteration and variation of a single motif. This repetition in itself becomes a ritual, giving profoundly personal events a universal language.

Throughout the exhibition, Ylva Ogland will use the first room—act 1—as her studio. In a studio installation titled The Painter's Studio, the Shadow World, she will be working on a large-scale painting depicting the exhibition as it is taking place. She will also paint grey-scaled replications of the curtain paintings separating the exhibitions acts. These will then be transported to Drottningholms Slottsteater, The Drottningholm Palace Theatre, where they will form a part of a ritual constituting the exhibition's epilogue.

A prologue to the exhibition took place in March of this year, as Ylva Ogland performed a ritual where she cut holes in the curtain paintings used to separate the exhibition's rooms and acts at Bonniers Konsthall.

Ylva Ogland was born in 1974 in Umeå in northern Sweden. She studied at the Royal Institute of Art in Stockholm and has lived and worked in New York, Berlin and Stockholm, where she is currently based. She has exhibited internationally at venues such as Palais de Tokyo in Paris, Center For Contemporary Art Ujadowski Castle in Warsaw and Performa in New York, and is represented in numerous collections, including at Bonniers Konsthall, The Modern Museum of Art in Stockholm, The Gothenburg Museum of Art, and the Chichu Art Museum and Naoshima Fukutake Art Museum Foundation, both in Japan.

A large part of the pieces included in this exhibition were made specifically for Bonniers Konsthall. A comprehensive book will also be published along with the exhibition, with contributions from Nicola Trezzi, Sinziana Ravini, Nicolas Bourriaud and Marina Fokidis. She, an Introduction is published in collaboration with Silvana Editoriale and will be released in June 2015.