The artist is known for his incisive look at landscapes reshaped by human interference. Nature Transformed primarily culls from Water, a five-year project chronicling the dramatic effects of manufacturing and consumption on the world. 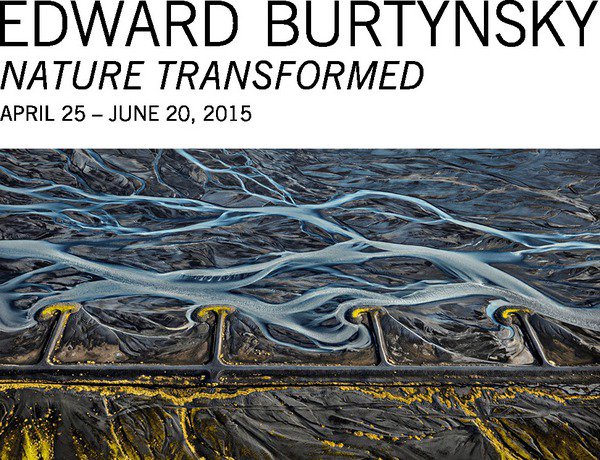 Von Lintel Gallery is pleased to present an exhibition of large-format color photographs by Edward Burtynsky. This is the artist’s first solo show with the gallery.

Burtynsky is known for his incisive look at landscapes reshaped by human interference. Nature Transformed primarily culls from Water, a five-year project chronicling the dramatic effects of manufacturing and consumption on the world’s most vital and rapidly depleting resource.

Science fiction-esque irrigation plots in Texas, ancient carved stepwells in India, and geometric rice terraces in China are translated in vivid color and crystalline detail from upwards of 7,000 feet. The aerial perspective necessarily brings into focus the massive scale and impact of these systems employed to redirect and control water.

“I document landscapes that, whether you think of them as beautiful or monstrous, or as some strange combination of the two, are clearly not vistas of an inexhaustible, sustainable world,” Burtynsky states. “We have to think more long-term about the consequences of what we are doing, while we are doing it. My hope is that these pictures will stimulate a process of thinking about something essential to our survival, something we often take for granted—until it’s gone.”

Also on view are images depicting the pitch black Volcanic sands of Iceland, marking Burtynsky’s return to pristine wilderness for the first time in over thirty years, and photographs from the Oil series: rectilinear rigs in Asia and tar sands operations in Alberta, Canada.

Known as one of Canada's most respected photographers, Burtynsky’s works are included in the collections of over sixty major museums around the world, including the National Gallery of Canada, the Museum of Modern Art, the Guggenheim Museum in New York, the Reina Sofia Museum in Madrid, and the Los Angeles County Museum of Art in California.

The artist’s fifth book, Burtynsky—Water, was published by Steidl in 2013 and a feature documentary, Watermark (co-directed by Edward Burtynsky and Jennifer Baichwal) premiered at the 2013 Toronto International Film Festival.

Gallery Hours:
Tuesday - Saturday
from 10am until 6pm