This group exhibition brings together the work of six artists active between the 1960s and today. Their work explores notions of destruction, construction and transformation. 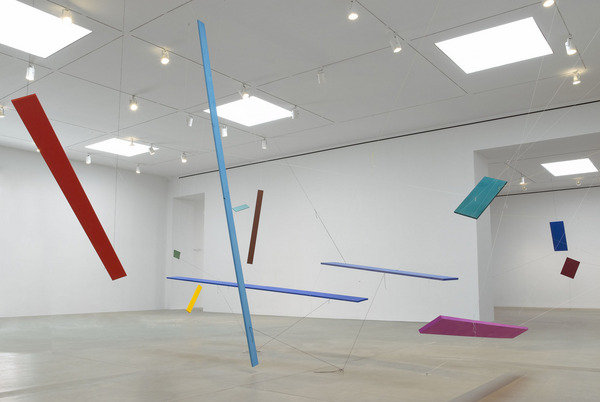 Almine Rech Gallery is pleased to announce 'Construction / Destruction', a group exhibition that brings together the work of six international artists active between the 1960s and today. Emerging from divergent contemporary trajectories across the globe, their work explores notions of destruction, construction and transformation, as forces of cyclical renewal to define the connections to, or away from, their own cultural past. The destructive tendency is crucial to the history of modern and contemporary art. However, presented here, these acts are no more violent than they are transformational, looking to develop dynamic visual and spatial relationships, or to construct multi-layered experiences, which engage the artist, the material and the agency of the viewer.

Together, the works of Joel Shapiro and Fernanda Gomes create a new landscape of form and meaning, which insists upon a phenomenological experience of space. Based in Rio de Janeiro, the work of Fernanda Gomes emerges from the traditions of Brazilian Constructivism and the Neo-Concrete. Created in situ, her installations reflect upon a process of discovery, assimilation and appropriation. Starkly minimal in her aesthetic approach, Gomes extracts discarded objects from the world – such as cotton thread, nails, wood, plastic bags, wire, or paintbrushes – most of which she paints the color white. Choreographing barely noticeably interventions among the gallery’s walls and physical space, her work requires extended observation as she poetically manifests fragments from the world. “The state of things on their way to disappearing appeals to me,” she explains, “they have a strange density in contrast to their precarious materiality.”

In a similar manner, American sculptor Joel Shapiro presents a series of new miniature sculptures, which despite their modest scale, command an unwavering presence. Sans plinth, his pieces are fixed and spread across the gallery’s floor. In this new series of intimately scaled works, Shapiro first constructs models of houses made of wood, which he then burns and later casts in bronze. His use of scale alludes to an extreme vulnerability, but at the same time conveys an aloof distance. Here, Shapiro revisits the motif of ‘the house’, a theme which first appeared and, in fact, dominated the work of his early career. Emerging in the sixties and seventies, in the wake of Minimalist and Conceptual art, Shapiro developed an iconography that drew upon private memory, but which sought out formal invention. The immediate physical experience of the artist’s sculptures is therefore psychologically charged, imbued with personal associations whilst simultaneously evoking everyday universal forms.

Performing serial acts of destruction, the young New York-based artist Adam Marnie not only interrogates the boundaries of sculpture, but explores and subverts the aesthetic of architectural space. Marnie’s work traces the influence of Minimalism, which he arguably embraces and critiques in a very physical way. ‘Locus Rubric’ (2011) appropriates construction materials, such as drywall, which the artist employs to build boxed forms that have been punctured by two fist-sized holes. As if to capture the immediacy of the impact, the sculpture has been encased and displayed within a frame to collect that rubble as it falls. However, through careful looking, the viewer finds that Marnie’s surface fissures are nothing more than a series of predetermined, constructed gestures that create tension between artifice and real presentations of violence.

Although the work of Jannis Kounellis and Kishio Suga developed separately within a distinctive national context during the postwar period, their work shares affinities in an approach to material and process, which articulates the artwork as a site of contingency, open to the possibility of fragmentation and ephemeral states. Japanese artist Kishio Suga is one of the most prominent figures of Mono Ha (School of Things), whose work emphasizes the close relationship between the fundamental nature of objects and the spaces in which they exist. In a series of wall-mounted assemblages presented here, Suga employs natural and industrial materials to create intimate pieces sparked with improvisational energy, reflecting the physical act of their construction. Similarly, the sculptures of Jannis Kounellis – one of the forefather’s of the Italian Arte Povera movement – can be characterized by the juxtaposition of objects and materials that may be physically and culturally antithetical to one another. Ordinary objects held a directness and immediacy for Kounellis, who sought to unite art with everyday lived experiences.

Lastly, Venezuelan artist Arturo Herrera’s work is rooted in the practice of collage. Incorporating the use of everyday printed materials into his visual vocabulary, Herrera combines dislocated fragments of popular imagery to create abstract compositions, which tap into our cultural subconscious and collective memory. In a recent series of 'Untitled' works, the artist has sourced found books from flea markets in Berlin. An example of Herrera’s first foray in painting, the artist deconstructs the notion of the picture plane by employing the book as his canvas. Dipping the objects into paint, the pages of each book are sealed shut, obliterating their content and destroying their original form. Continuing to spill and drip paint over the surface, Herrera transforms the discard paperback and hardcover books into intimate object-based paintings, which, through built up layers, invoke the process of collage to create compelling new graphic forms.