Sands of Time. On view photographs and sculptures that document the economic, political and geographical movements around sugar trade, and a three-channel installation in the Project Space. 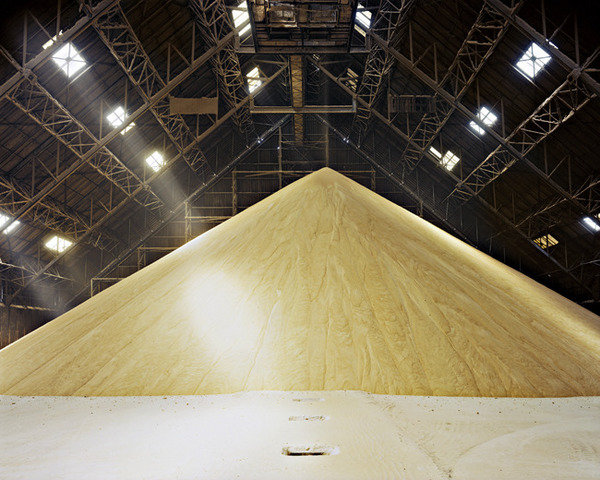 The Third Line is pleased to present Sands of Time, Zineb Sedira’s first solo show in the region. The acclaimed artist will be showing photographs and sculptures that document the economic, political and geographical movements around sugar trade. She will also be exhibiting the video Transmettre en abyme, which will be shown in a three-channel installation in the Project Space. Zineb's photographs and video works use the intimate perspective of her own experience to investigate more universal ideas of mobility, memory and transmission, as well as explore issues concerning the environment.

A relatively new body of work, Zineb’s photographs for the Sugar Routes series have all been produced in 2013. The documentation traces the movement of sugar, starting its journey from locations across the world, and ending in the Port of Marseille, to form the sugar silos of St. Louis Sucre. The warehouse storage rooms become backgrounds to a new kind of landscape, where the heaps of different coloured sugar resemble mountains. After filtering, the sugar is packaged off as a global commodity, its own local identity being lost somewhere along the trade routes. However, the sugar leaves behind traces of its presence on the walls that temporarily house it. These are documented by the artist as symbolic commentary on human mobility, presenting concepts of legacy and its transmission, and mankind’s impact on his environs.

The exhibition also includes two sculptural interventions that tie the relationship between sugar and maritime elements. In sugar covered ship parts (Sugar Routes II), and bottles containing sugar samples from all across the world (Seafaring), the substance becomes more than its commercial, literal self. Instead it becomes a metaphorical reference to individuals, who journey across these same routes; often in search of better lives.

The video installation in the Project Space, Transmettre en abyme, is a unique documentation of the late Marcel Baudelaire's compulsive photographic ‘ship spotting’ of the vessels that arrived and departed from the port of Marseille from 1935 to 1985. The archive is looked after by Helene Detaille, who is seen in the video passionately explaining the systems of documentation – counting, ordering and classification of Baudelaire’s archive – as well as her methodology in preserving the archive. The collected images speak of the endless flow of goods and human cargo transported by the vessels Baudelaire photographed. Transmettre en abyme adds to Zineb’s practice of preserving historical narratives and her impassioned relationship with the sea.

Zineb Sedira was born in Paris to Algerian parents in 1963. She studied at the Central St Martin’s School of Art and the Slade School of Art, followed by research studies at the Royal College of Art. The artist's photographs and video installation use the perspective of her own experience to frame questions about language, transmission, memory and mobility.

Zineb lives and works between Algiers, Paris and London.