The exhibition thus takes in a dual perspective: both historical and contemporary. It traces the aesthetic, political and media contexts that distance our present from Fassbinder's time while simultaneously linking to it. 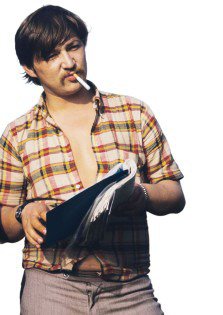 The Deutsches Filmmuseum, Frankfurt am Main, presents the exhibition “Fassbinder – NOW” in nine rooms at the Martin-Gropius-Bau, Berlin, from 6th May to 23rd August 2015, to mark Rainer Werner Fassbinder’s 70th birthday on 31st May. The presentation provides a new impetus to engage with one of the most significant German directors.

“Fassbinder – NOW” illustrates not only the film-maker's working methods, but also the coherence of his work in the cinema and its influence on the art being produced today. The exhibition thus takes in a dual perspective: both historical and contemporary. It traces the aesthetic, political and media contexts that distance our present from Fassbinder's time while simultaneously linking to it.

The presentation begins with a juxtaposition: headlines and texts reflect the original public reception of Fassbinder’s persona and his work. Fassbinder explains his understanding of film in excerpts from television interviews that may be seen on nine monitors – in the process implicitly clarifying the methods with which he stage-managed his own public image.

In the first part of the exhibition a different aspect of Fassbinder is juxtaposed with the image intended for public consumption: original documents and personal effects from his estate provide visitors with detailed insight into the director's projects and the environment in which he lived. Notes, letters, calculations, manuscripts, screenplays and shooting schedules trace Fassbinder's work methods as well as his personal attitude and illuminate his strategic and structural approach. A slideshow presents the director highly concentrated at work with his team. Visitors may leaf through digitised documents, such as complete screenplay manuscripts, at media stations, or further explore his professional archive by listening to his recorded notes for his masterpiece “Berlin Alexanderplatz” (1979/80). Additional attention is paid to Fassbinder’s work with the costume designer Barbara Baum. Alongside her costumes, such as the spectacular silver lamé dress worn by Hanna Schygulla in “Lili Marleen” (1980) and the sailors’ uniforms from “Querelle” (1982), sketches from her personal collection will also be shown.

The second part of the exhibition illustrates the recurring themes and aesthetic resources in Fassbinder’s films, juxtaposed with the works of contemporary artists that refer to them either directly or indirectly. Thus, on a free-floating screen one may see film clips showing Fassbinder’s 360-degree tracking shots, including the famous scene from “Martha” (1973). This is followed by Runa Islam’s video installation “Tuin” (1998), for which this tracking shot serves as a point of reference.

Excerpts from Fassbinder’s films, shown as a compilation on three large screens, introduce the most important themes in his œuvre and also highlight the stylistic resources, such as lighting, framing and direction of gaze, that characterise his films.

Jeroen de Rijke / Willem de Rooij, Tom Geens, Maryam Jafri and Ming Wong as well as the Canadian photographer Jeff Wall have also employed aesthetic strategies, themes and motifs from Fassbinder’s films in their works. These are linked to the artists’ own attitudes. Their works facilitate a new way of looking at Fassbinder’s work; they show which aspects are of particular relevance today and demonstrate, on a higher level, how the cinema affects contemporary media. The video works, conversely, give an impetus for the reception of Fassbinder in the present.

The project is a cooperation with the Rainer Werner Fassbinder Foundation, Berlin, and is supported by the Capital Cultural Fund.
hide

Admission free for those aged 16 or under
Combination tickets at reduced rates are available at the cashdeck.