Give Me Love. For the exhibition the artist presents new paintings from the celebrated My Eternal Soul series, new polka-dotted pumpkin sculptures, and the seminal installation The Obliteration Room from 2002. 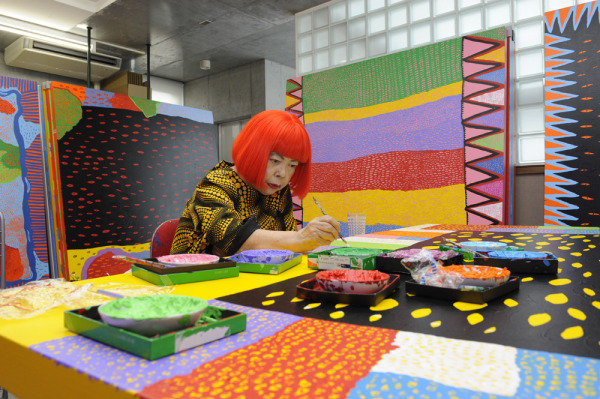 David Zwirner is pleased to present Give Me Love, the gallery’s second exhibition with Yayoi Kusama in New York. On view in two spaces, 519 and 525 West 19th Street, will be new paintings from the celebrated My Eternal Soul series, new polka-dotted pumpkin sculptures, and the artist’s seminal installation The Obliteration Room from 2002.

Widely recognized around the world, with a recent survey of museum attendance ranking her as the most popular artist in 2014, Kusama has shaped her own narrative of postwar and contemporary art. Minimalism and Pop art, abstraction and conceptualism coincide in her practice, which spans painting, sculpture, performance, room-sized and outdoor installations, the written word, films, fashion, design, and architectural interventions.

Born in 1929 in Matsumoto, Japan, Kusama briefly studied painting in Kyoto before moving to New York City in the late 1950s. She began her large-scale Infinity Net paintings during this decade, and went on to apply their obsessive, hallucinatory qualities to her three-dimensional work. Her iconic polka dots, organic shapes, and optical environments display an unparalleled vitality that becomes hypnotic and self-referential, merging concepts of flatness and depth, presence and absence, and beauty and the sublime. In a unique style that is both sensory and utopian, Kusama’s work possesses a highly personal character, yet one that has connected profoundly with large audiences around the globe, as throughout her career she has been able to break down traditional barriers between work, artist, and spectator.

Kusama continues her recent series of large-format, square My Eternal Soul paintings with a group of canvases conveying extraordinary vitality and passion. With titles such as Fear of Youth Overwhelmed by the Spring Time of Life, I Who Have Taken an Antidepressant, and My Longing, the Unseen Land of Death, the compositions acquire an autobiographic, even confessional dimension. The bold brushstrokes and swirly shapes seem to hover between figuration and abstraction; vibrant, animated, and intense, they transcend their medium to introduce their own pictorial logic, at once contemporary and universal. As such, while they continue Kusama’s innovative exploration of form, subject matter, and space, they also represent a connection to her work from the past six decades.

The sculptures on view include new stainless steel pumpkins featuring either painted or perforated dots. Their exaggerated sizes—the tallest being approximately 70 inches (178 cm) high—seem measured after human proportions, and their mirrored surfaces are thus able to contain viewers’ full body reflections. While pumpkins have appeared in Kusama’s work since her early art studies in Japan in the 1950s, they gained increasing prominence from the late 1980s onwards. The juxtaposition between the lush organic shape and its shiny, steel materiality here creates a psychedelic impression, but ultimately the bulbous forms emerge as celebratory and animated, absorbing viewers and their surroundings in their own image.

The exhibition marks the United States debut of The Obliteration Room, an all-white, domestic interior that over the course of the show is covered by dots of varying sizes and colors. In a departure from earlier iterations of the work, which have involved one or several rooms, the present installation is built like a typical, prefabricated American suburban house. As visitors are handed a set of stickers and step inside, they enter a completely white residential setting where otherwise familiar objects such as a kitchen counter, couch, and bookshelves are all painted the same shade. Gradually transforming the space as a result of the interaction, the accumulation of the bright dots ultimately changes the interior until it is eradicated into a blur of colors. A sense of depth and volume disappears as individual pieces of furniture, floors, and walls blend together.

Kusama has noted that she began to see her surroundings through a screen of dots early in her life, and she later came to refer to the process as obliteration—the gradual removal of any trace of something. Several happenings from the 1960s and onwards were called Self-Obliteration and involved the artist covering herself and others with dots. Their all-enveloping presence in The Obliteration Room also recalls the artist’s infinity rooms, in which thousands of small lights flicker against mirrored walls—an example of these was presented during Kusama’s first exhibition with the gallery in 2013.

Immersed in her studio six days a week, Kusama has spoken of her renewed dedication to creating art over the past years: “[N]ew ideas come welling up every day….Now I am more keenly aware of the time that remains and more in awe of the vast scope of art….I believe that the creative urge in art is born of quiet, solitary contemplation and takes flight from the silence of the soul’s repose in the form of rainbows of shimmering light….I feel how truly wonderful life is, and I tremble with undying fascination for the world of art, the only place that gives me hope and makes life worthwhile.”1

Yayoi Kusama joined David Zwirner in early 2013, and had her inaugural exhibition with the gallery in New York that same year. Immediately following its opening, Yayoi Kusama: I Who Have Arrived In Heaven received widespread critical acclaim and international media coverage, quickly becoming David Zwirner’s most well-attended show. Attracting thousands of visitors a day, the exhibition was deemed a social media sensation and hailed by The New York Times as encouraging “the ultimate selfie.” Published on its occasion was a fully illustrated catalogue, which includes new scholarship on the artist’s work by art critic and poet Akira Tatehata and an original poem written by Kusama herself.

Since her first solo show in her native Japan in 1952, Kusama has exhibited widely in international solo and group presentations. The artist’s work was the subject of a large-scale, well-received retrospective that traveled from 2011 to 2012 to the Museo Nacional Centro de Arte Reina Sofía, Madrid; Centre Georges Pompidou, Paris; Tate Modern, London; and the Whitney Museum of American Art, New York.

Kusama was recently named the world’s most popular artist by various news outlets, based on annual figures reported by The Art Newspaper for global museum attendance in 2014. Her exhibitions were the most visited worldwide last year, with three major museum presentations simultaneously traveling through Japan, Asia, and Central and South America—all of which have drawn record-breaking attendances at every venue.

Traveling through Asia, Yayoi Kusama: A Dream I Dreamed encompasses over one hundred recent works and was first displayed at the Daegu Art Museum in Korea, followed by the Museum of Contemporary Art Shanghai and the Seoul Arts Center. It travels to two institutions in Taiwan—currently on view at the Kaohsiung Museum of Fine Arts (through May 17, 2015) and then to the National Taiwan Museum of Fine Arts, Taichung (June 6 – August 30, 2015)—as well as to India at the National Gallery of Modern Art, New Delhi (opening November 2015).

Yayoi Kusama: Infinite Obsession has been seen by more than two million people along its tour through Central and South America. Consisting of over one hundred works created between 1950 and 2013, it opened in June 2013 at Malba – Fundación Costantini, Buenos Aires and traveled to the Centro Cultural Banco do Brasil, Rio de Janeiro; Centro Cultural Banco do Brasil, Brasília; Instituto Tomie Ohtake, São Paulo; and the Museo Tamayo Arte Contemporáneo, Mexico City. The show is currently on view at the Fundación CorpArtes, Santiago (through June 7, 2015).

In the fall of 2015, the Louisiana Museum of Modern Art in Humlebæk, Denmark will present a comprehensive overview of Kusama’s practice, including works that span the full length of her career, that will travel to other major Scandinavian institutions.