Kubus. Sparda Art Prize. The nominees are Nevin Aladag, Peter Vogel, and the artist duo Discoteca Flaming Star. Each will exhibit their work on one floor of the Cube. During the period of the exhibition a second jury will select this year's award winner. 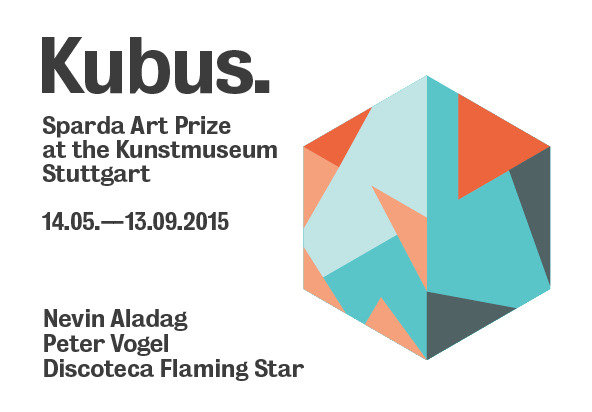 In 2015 Sparda-Bank Baden-Württemberg and the Kunstmuseum Stuttgart are awarding their jointly established art prize Kubus for the second time. The award honors outstanding achievements in the visual arts biennially.

Kubus. Sparda Art Prize at the Kunstmuseum Stuttgart has been conceived as an open prize; it is meant neither as a recognition award for older nor an advancement award for young artists. The artists must have a connection to the state of Baden-Württemberg. They may be natives of the state or have based the focus of their artistic work here. The nominees are selected by a committee comprised of representatives from Baden-Württemberg museums, academies, and art associations. The theme "art & music," under which the Kunstmuseum Stuttgart is celebrating its tenth anniversary in 2015, also defines the work of the participating artists.

The nominees are Nevin Aladag, Peter Vogel, and the artist duo Discoteca Flaming Star. Each will exhibit their work on one floor of the Cube. During the period of the exhibition a second jury will select this year's award winner.

Nevin Aladag (b. 1972 in Van, Turkey, lives in Berlin) grew up in Stuttgart and studied at the Academy of Fine Arts in Munich. In her video works she thematizes the musical expression and dance of various cultures, developing a special cartography from them. For the current exhibition the artist spent the last few months producing a video in Stuttgart. In Traces (2015), Western European instruments—such as an accordion produced in Baden-Württemberg—can be seen and heard. Rather than being played by people, however, the instruments are seemingly performed by the environment. Traces serves as a counterpart to the earlier video work Session (2013), which was filmed in the urban zones and deserts of Sharjah.

Peter Vogel (b. 1937 in Freiburg, lives there) initially studied physics and worked as an engineer. He is a pioneer in the field of electronic music. The sculptures he constructs out of metal rods and minute electronic components, in part combined with traditional music instruments, respond interactively to the viewer's motion. Movements made in front of the sound objects are translated into sounds and tone sequences by means of integrated photocells. Correspondingly, viewers can influence tempo, pitch, and timbre. Along with his acoustic works, Vogel will present light objects that transform acoustic impulses into light signals.

Discoteca Flaming Star (Cristina Gomez Barrio, b. 1973 in Alhambra, Spain; and Wolfgang Mayer, b. 1967 in Wertach; live in Berlin and Madrid) have collaboratively developed art projects since 1998. In 2011 they assumed a professorship for intermedial design at the Academy of Fine Arts in Stuttgart. The starting point for their presentation is the installation performance piece Sticky Stage begun in 2012, which they will expand in Stuttgart. Here the duo intertwines two feature films—Uccellacci e uccellini by Pier Paolo Pasolini and Jules Dassin's The Rehearsal about the Greek military junta in 1967–74—with commentaries of their own in the form of banners, videos, and documentaries of previous performances in a former military compound near Madrid.