From a Poem to the Sunset

First part of an exhibition series with new acquisitions of contemporary Chinese and international art. They are part of the area of abstract and conceptual tendencies, and the "new media". 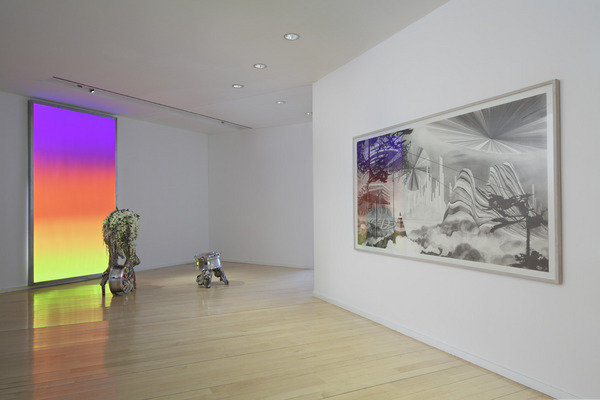 In 2013, the Daimler Art Collection began adding a significant new aspect to its international profile, with the acquisition of more than 40 artworks by about 20 Chinese artists. From this year on, these new acquisitions will be presented to the public in an exhibition series in Berlin. These works by Chinese artists relate well to the Daimler Art Collection's areas of special interest: the area of abstract and conceptual tendencies, and the "new media" area. At the same time, they form a new complex of their own within the fabric of the collection, which is culturally and aesthetically distinctive.

This exhibition series in Berlin will present the recent Chinese acquisitions in the context of the Daimler Art Collection. This "dialogue" with international artistic concepts will bring out the unique qualities of the new acquisitions, but it will also bring out parallels and relationships in the form of shared artistic concerns. The first part of the exhibition—From a Poem to the Sunset—is primarily devoted to conceptual tendencies, which first became observable in contemporary Chinese art in the mid-1980s but which, notwithstanding this, form the basis of the working methods of many younger artists.

Furthermore an extensive program of supporting events accompanies the exhibition series. At the heart of this is a series of talks: an autonomous forum on specifically Chinese themes that will bring together a selection of art protagonists from China, with the hosts acting in the role of moderator. The talks will concern the artistic background and ethos behind the presented artworks, alongside fundamental issues and current themes of cultural and social development in China. The discussions, lectures and performances will give the artists featured in the exhibitions the opportunity to speak. Furthermore it is planned to host a multi-day symposium in Berlin, which will bring together some of the most knowledgeable protagonists on this subject from the international academia. The insights arising out of these events are going to be published online, and in an accompanying publication, which will be released at the beginning of 2016.