Struggler. The images presented in the artist's latest paintings and the simple words of the titles may easily lead the audience delve into the contemplation over the ancient subject that is presumably 'nature and eternity'. 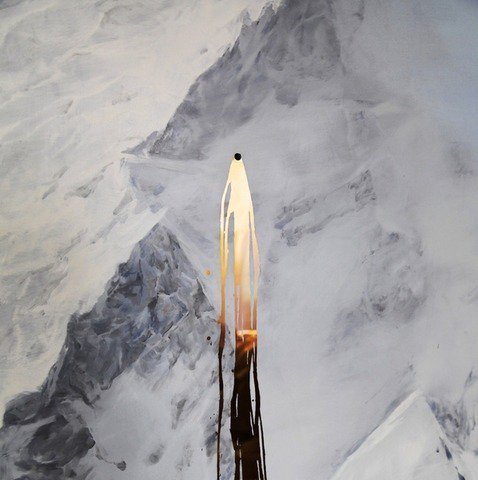 Galerie Perrotin is pleased to present the first solo exhibition of Gao Weigang in Hong Kong, opening on May 21

The original title of the exhibition was comparatively more poetic: “Star and Dust”. The images presented in the artist’s latest paintings and the simple words of the titles may easily lead the audience delve into the contemplation over the ancient subject that is presumably “nature and eternity”. However, those who are no strangers to Gao's past oeuvre will particularly watch out for the “hints” arisen from his excessive bluntness. By deploying his habitual practice, the artist frames the whole show as a puzzle, but for this time, imparts an air of romanticism.

Doubts and clues stem from the specious sentiments arisen by the “artistic” elements in the works. From a distance, the painting series on stainless steel depicts night skies with twinkling stars spreading over. Yet, when one approaches these images symbolizing vastness and eternity, the “stars” with golden sparkles turn out to shapes that are far from what we imagined. In an instance, these tiny cartoon-styled icons completely disrupt the naturalistic atmosphere constructed at one's first sight. The ancient topic stops with a witty smile, while the curiosity towards the true intention of the artist has been stimulated.

Such anti-empirical “grafting” also prevails in the installation “The New World”: By thoroughly stripping away the expected industrial characteristics - crudeness and the juggernaut - of the breaking hammer, the artist outlines a delicate and yet fragile object with refined contours. Functioning like a musical box, the golden hammerhead circles in a soothing and peaceful melody, by which the sensation puts viewers in a sense of absurdity where one hardly discriminates the reality from the illusion. Another installation piece “Where” inherits his obsession towards employing two-dimensional images to construct spatial misconception. Gao uses metal lines to shape a spiral “ladder” against the facade of a whole wall, drawing the onlookers to climb along and yet being endless, which repeatedly entraps them in the visionary labyrinth.

By deliberately erecting conflicts and irrational combinations, the artist juxtaposes the antinomies to reveal the one-sidedness of human cognition. As Kant put it, as far as human rationality is concerned, the world is nothing more than a phenomenal world. Our rationality has the capability of perceiving, processing, comprehending and conceptualizing a phenomenal world, while the world can only be conceived and understood via phenomena. Kant used the word “synthesis” to summarize the product that human rationality achieves after processing the received phenomena. What Gao has revealed is precisely the one-sidedness and the restrictions caused by the participation of an individual in the process of “synthesizing”.

Compared with the content, Gao's selection on material and methods carry much more signification. When describing the “additional” shapes in the paintings on mirrored stainless steel, it is difficult to embody the connection between those shapes and the two pictorial layers – one painted by the artist and the other reflected by the stainless steel – in a simple and logical math formula. It is more like a disguise where the artist merely appropriates the configuration of another image to uncover a fraction of the original substance. Here, a scenery image is nothing more than itself. Its existence and interplay of one with another do not function as representation or metaphor other than pure principles of aesthetics. The subjectivity during the process of “synthesizing” explains why those images will entice false interpretation. It does not matter whether it is a “snow mountain” or “ocean”. What it does is, when one realizes it differs from what is presumed, the dialectical thought of “self-denial” follows. Apparently, Gao is willing to disclose the “self-denial” and to guide the audience to solve the “puzzle” by self-questioning.

What is the real being of a “star”? In the artwork “Star”, the artist obviously does not intend to symbolically answer the question by presenting a rock in its most primitive sculptural form. On the contrary, through the approach of repeating and unifying, he painstakingly reminds us that the relic of the cosmos could be anything but the artificially manufactured replica presented hereby. There lie many unpredicted possibilities between the thing-in-itself and the witnessed phenomena, the judgment, the knowledge and the truth. All the questions evoked by the artworks make the audience hesitantly linger around. In this subtle, wavering status, propelling people to get rid of the confinement of images and intellectual systems, probe into the essence of beings, observe the intangible and unidentified phenomena in our daily life, and further arouse suspicion, conjecture and analysis about the real existences or even irrelevant minutiae of consciousness, perhaps this is the artist’s true intention veiled behind the appearance of his academic aesthetics and cunning hoaxes.