Baselitz and Vedova first met in Berlin in the early 1960s. At that time, Vedova had received a grant from the German Academic Exchange Service and was working on his 7-part installation Absurd Berlin Diary, in line with Dadaist examples. 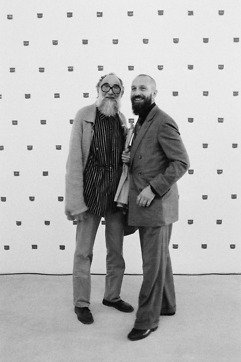 It is with great pleasure that we announce the collaboration between the Fondazione Emilio e Annabianca Vedova and the Galerie Thaddaeus Ropac. Our first joint project will be a double exhibition combining a new series of works by Georg Baselitz with works from the 1980s by Emilio Vedova.

The Venetian painter Emilio Vedova (1919-2006) was one of the most prominent representatives of Italian informel. He first took part in the Venice Biennale in 1947, and devoted his whole life to the development of non-representational painting. Works by Vedova were shown at exhibitions including the legendary documenta exhibitions I, II and III (1955, 59 and 64) in Kassel. By the end of the 1950s, Vedova had become established in the international art scene as a classic of abstract painting.

From the beginning of the 1980s, Vedova became an important integrative figure for an up-and-coming generation of neo-expressive artists – as was demonstrated in 1982 by his renewed participation in documenta (7), as well as by many publications and solo exhibitions in the ensuing years.

"The central contrast between the two non-colours black and white is a decisive characteristic of Vedova's œuvre [...]. This polarisation, later often complemented by a further strong colour such as red or blue, complies with an inherent wish for clarity of expression, and prevents blurring into diverse nuances. Moreover, the black levels enhance the intensity of the overall effect, defining the formal orientation, which might otherwise easily be obscured by colour values" (Carla Schulz-Hoffmann, 1986). In this context, the contrast with American-style Abstract Expressionism is interesting: while Jackson Pollock, for instance, introduced in his Drippings a neutralising element, so that the work in its overall structure could be continued indefinitely, Vedova remains at the centre of the picture, the dimensions of which are always accessible to him, in keeping with the size of his own body. Characteristic of Vedova's painting is l’ubiquità del centro, the omnipresent centre.

This concentration on the centre is also an important aspect of Georg Baselitz's new series Ma grigio. "Each picture shows two pairs of legs, vaguely suggested in blurred shades of grey on a black ground, attempting a wild but spasmodic dance. They are cut off above the calves, and the feet are in high-heeled shoes. This 'windmill commotion', alternating between cheerful exuberance and expressionless staccato, is abruptly stopped, since the edges of the pictures prevent uninterrupted rotation. Here Baselitz pushes the abstraction of the figurative to a new level. If previously, despite alterations, the unity of the figure was to a certain extent retained, here it has become obsolete. It can no longer be made to fit a definable form with some relation to reality; the individual parts become ciphers for a purely notional idea. The centre of the picture, where the legs would have to collide, remains vague, sometimes lightly covered by pale grey, runny streaks of paint, sometimes appearing like a dark opening" (Carla Schulz-Hoffmann, 2015).

Baselitz’s unusual chain of association for this series ranges from Lucio Fontana's Attese pictures dating from the 1950s and '60s, through Gustave Courbet's provocative painting L'Origine du monde (1866), right up to the Mexican dancers and Frida Kahlo. On the other hand, this series is based on Baselitz's intensive reflection on the "problem of the empty centre" in scenes of the Annunciation from past centuries.

The foot, the dominant (and isolated) element in the new series, has been a leitmotiv in Baselitz's work since the 1960s. The disembodied feet reminiscent of Théodore Géricault, the feet crammed into tiny shoes in the New Types, Edvard Munch's feet in the series Spaziergang ohne Stock [Walking without a stick], the huge cowboy boots, the high heels of the recent monumental wood and bronze sculptures, and so on. "Feet are my earth wire. For me the earth connection is more important than the transmission. For me the reception via an earth wire is much better than through an antenna – perhaps I've got more in common with the trolls than the angels, who knows? Funnily enough, I also paint crouched down; I walk across the paintings" (Georg Baselitz, 2006).

Baselitz and Vedova first met in Berlin in the early 1960s. At that time, Vedova had received a grant from the DAAD [German Academic Exchange Service] and was working on his 7-part installation Absurd Berlin Diary, in line with Dadaist examples. Baselitz and Vedova shared not only a long-standing, intensive friendship, but also appreciation of each other's artistic approach. Baselitz had already purchased a work by Vedova in 1957, through the Galerie Springer, which represented both artists and held Vedova's first solo exhibition in Berlin that year. Baselitz recounts: "I bought a picture by Emilio, his Universal Manifesto (1957) [...] as a document, my first view through the west window in Berlin, an abstract […] and all the heart could desire. With regard to this picture, people kept telling me Franz Kline was better – but he isn't! [...] Emilio loved ambushes, he was a partisan, he loved the revolution, the grand gesture, Expressionism, and me. But I'm not an Expressionist, and I despise the revolution; at best, we can produce paintings, maybe even some good ones. I used to make fun of him, and he'd look at me in bewilderment. Annabianca understood everything better" (Georg Baselitz, 2007). After Vedova's death in 2006, Baselitz made a series of black-and-white tributes to Emilio Vedova (Omaggio a Vedova), first shown in the Venice Pavilion at the 2007 Biennale, in combination with three-dimensional works by Vedova. This was the origin of the idea for the Salzburg project. In 2008, the Berlinische Galerie also held an exhibition of works by both artists.

Emilio Vedova had a special relationship with the town of Salzburg. Every year from 1965 to 69 he directed master classes in painting at the Salzburg International Summer Academy, and during this period he also influenced the cultural life of the town. In 1988, the Künstlerhaus held a solo exhibition of his work, which attracted widespread notice.