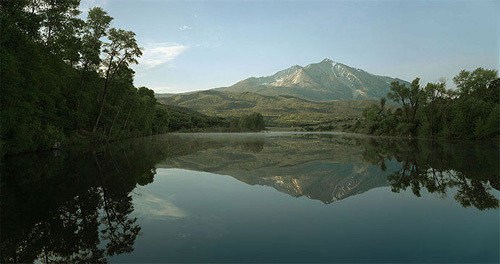 Clifford Ross: Landscape Seen & Imagined takes place throughout two buildings, six galleries, and, at night, within MASS MoCA’s exterior performing arts courtyards. The exhibition includes a 24’ high x 114’ long negative image of a photograph printed on raw wood, which spans the length of MASS MoCA’s tallest gallery. Hyper-detailed photographs of hurricane waves and mountains are presented alongside a new “invisible art” project called Harmoniums that features animated virtual elements only visible by means of the viewer’s smartphone. An immersive outdoor installation of animated video on twelve separate 24’ high screens opens on June 26, in the second phase of the exhibition. Accompanied by a soundscape curated by Ross’ musical collaborator, John Colpitts (aka Kid Millions), the video plays at dusk on Thursday and Friday evenings throughout July and August.

In Gallery 4.1.1, a show named after the gallery in which it is staged, artist Liz Deschenes takes the fundamental conditions of photography and its display as the subject of her work. Over the past two decades, Deschenes has expanded the possibilities of “self-reflexive” or “concrete” photography, making visible the materials and processes of the medium — namely, the interaction of paper, light, and chemicals. She exposes light-sensitive, silver-gelatin paper to ambient light before toning and fixing it to create her atmospheric, monochromatic photograms. At MASS MoCA, the natural light flooding through a wall of windows in the gallery contributes to the constantly shifting appearance of Deschenes’ photographs, which continue to develop over time. As much sculptural objects as photographs, the works shape and color the space around them.

In conjunction with Liz Deschenes’ solo exhibition, MASS MoCA curator Susan Cross invited Deschenes to organize a group exhibition entitled Artists' Choice: An Expanded Field of Photography, which includes Dana Hoey, Miranda Lichtenstein, Craig Kalpakjian, Josh Tonsfeldt, Sara VanDerBeek, and Randy West. Several artists make works that are camera-less; for others, photography has laid the groundwork for the moving image, or functions as a jumping-off point for sculptural and architectural investigations. The exhibition provokes a dialogue on the state of photography as an increasingly diversified medium that intersects and informs other fields of art making.