Representations of animals are everywhere in our culture. The animal has become a potent figure of speculative inquiry, offering radically new conceptions of ethics and agency for all species. With works by leading artists and photographers. 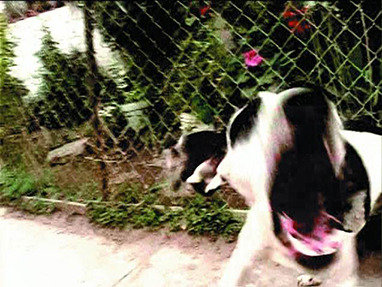 Representations of animals are ubiquitous in our culture, from advertising hoardings, to newspapers and television, to hundreds of thousands of images uploaded every day to the internet. Human beings, it seems, are obsessed by the image of the animal. Animals are also consistently subjects of public controversy, whether in relation to animal rights, agro-industrialisation, conservation or genetic engineering. Recently, an expanding field of animal studies has sought to question humankind’s relation to the animal world, challenging long-held humanist assumptions about the animal’s external relation to man. In the writings of Derrida, Deleuze and other post-Heideggerians, the animal has become a potent figure of speculative inquiry, offering radically new conceptions of ethics and agency for all species.

The exhibition begins with artists who challenge familiar categories of animal representation, undermining the traditionally anthropocentric nature of vision. Thus Sam Easterson attaches a camera to an armadillo to forge a more beastly vision, whilst in Jitka Hanzlová’s intense attention to the physicality of the horse we are presented with a more egalitarian mode of human-animal exchange. Animal contexts – e.g. the swarm – become more important as in Christoph Brünggel and Benny Jaberg’s film, Following. Other work challenges the traditional opposition of (human) interiority and (animal) surface, producing in the images of Peter Hujar or Pietro Mattioli eerie human-animal portraits. Classic series from the history of photography such as Balthasar Burkhard’s Escargot combine with more recent examples of the digital sublime in photography and film. The photographs of Simen Johan or Nicolas Deveaux’s film, 5m80, appear to offer animals a purer, perhaps anti-humanist, mode of being.

The exhibition then evolves through more socially critical categories, revealing the animal as subject to human exploitation through control or commodification. It begins to explore the way that animals are embroiled in human processes and passions. Animals are caged, consumed, or captured, objects caught up in a very human animal-industrial complex. The sublime scale of agro-industry is revealed in Mishka Henner’s Feedlot series, whilst Erik Kesselsʼ found photo series, In Almost Every Picture, offers an ironic commentary on the animal as human food. The role of the domestic pet is explored, as is the animal as an object of human sexual desire, seen in Carolee Schneemann’s Infinity Kisses. At the same time, the animal as a figure of critique begins to emerge, either in the form of political allegory, or appropriated as a radical sign, questioning, for example, in the work of Sammy Baloji forms of colonial repression. In the film L’étalon noir by Moussa Sarr we are asked to consider whether such oppressions in the human world derive from rejection of our own animality.

Beastly/Tierisch also looks at self-reflexive modes of artistic critique, seen in the animal whose status is altered through representation. Thus Elad Lassry pursues the formal possibilities of the pet as visual fetish, whilst in his attention to the microstructure of photographic surfaces, Jochen Lempert raises questions of animal embodiment and multiplicity. We perceive here a more ‘beastly’ positioning emerging, pursued by artists who seek a bio-centric perspective. Thus Marcus Coates crumples in his hands precisely rendered, National Geographic-style photographs of animals, drawing our attention to animal surfaces, whilst Charlotte Dumas’s film Anima seems both to displace the human from animal representation altogether, as well as to create a profound affiliation. A traditional essentialist opposition between human and animal is broken down as artists attempt to think the animal creatively beyond ourselves revealing their inherent value outside the human domain. The exhibition concludes with work that engages with the question of animal futurities, including the possibility that in our biotechnological and digital present animal identities become ever more fabricated. Indeed, Revital Cohen and Tuur van Balen’s recent project, Sterile, suggests the end of any meaningful conception of ‘nature’ altogether.

Finally, Beastly/Tierisch also deals with the ubiquity of animal representation in photography through a gallery devoted to a selection of vernacular materials, such as books, posters, postcards as well as a host of recent internet images, a veritable virtual zoo. Here the field of analysis and critique is extended from the realm of art into everyday representation. The gallery will have a research laboratory quality about it, encouraging participative engagement on the part of visitors as well as forming part of an extensive education programme.

Catalogue
The exhibition is accompanied by a fully-illustrated catalogue published by Spector Books, Leipzig. It includes essays about animality and the history of photography (Duncan Forbes), the political animal (Slavoj Žižek), the animal and the internet (Ana Teixeira Pinto) and the changing evolutionary identities of animals under anthropogenic pressures (Heather Davis). Price 29 CHF.

The installation is made possible through the generous support of the Verein Fotomuseum Winterthur and the Else v. Sick Stiftung.