William Kentridge presents the multimedia cycle of works entitled 'The Nose', which is based on the eponymous surreal short story written by Nikolai Gogol in 1836. Carlos Bunga has conceived a site-specific walk-through installation of cardboard, paint, and adhesive strips, on the 5th floor. 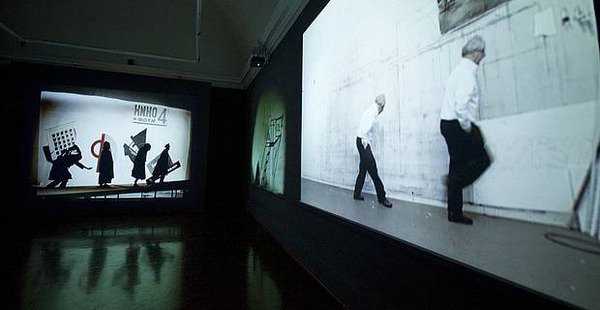 The South African artist William Kentridge (b. 1955 in Johannesburg) is one of the most highly regarded artists of our time. Museum Haus Konstruktiv is presenting this exceptional artist's first comprehensive solo exhibition to be held in Switzerland. Here, the focus is on the multimedia cycle of works entitled “The Nose”, which is based on the eponymous surreal short story written by Nikolai Gogol in 1836. In 2006, the Metropolitan Opera in New York commissioned William Kentridge to stage Dmitri Shostakovich's opera of the same name (first performed in 1930 in Leningrad). In this context, a series of works were produced, which can be categorized as visual art, theater and film.

In addition to the large-scale video installation “I am not me, the horse is not mine”, which has previously been shown, for instance, at London's Tate Modern in 2012, Museum Haus Konstruktiv is also exhibiting a number of little-known drawings, prints, paintings, sculptures and tapestries. Kentridge himself describes this work-complex as an elegy for the artistic language of the Russian constructivists and their stimuli for social transformation.

The exhibition is accompanied by a catalogue in German and English with essays by William Kentridge, Jane Taylor and Sabine Schaschl that will be published by “Verlag der Buchhandlung Walther König”.

Curated by: Sabine Schaschl
Carlos Bunga: I am a Nomad

The Portuguese artist Carlos Bunga (b. 1976 in Porto, lives in Barcelona) has become famous in recent years for his architectural interventions with cardboard and adhesive strips. Having started with painting, Bunga soon expanded on his original artistic practice by adding different media, such as collage, drawing, performance, sculpture, and video. His artistic engagement focuses on architecture and the urban space, as well as on living conditions in our time, which are characterized by constant change, as is also evident in his choice of materials: variable and ephemeral forms of dwelling can be produced quickly with simple means. Bunga's exhibition title “I am a Nomad” refers not only to his nomadism in terms of art media, but also to a way of living that is widespread in times of globalization.

For his exhibition at Museum Haus Konstruktiv, Carlos Bunga will conceive a site-specific walk-through installation of cardboard, paint, and adhesive strips, on the 5th floor. One room on the 4th floor is devoted to the drawings, sculptures and video works that Bunga develops in response to his installations. This exhibition is the first presentation in Switzerland by this artist, who has been nominated for the Artes-Mundi Art Prize 2014.

There will appear an artist book with drawings by Carlos Bunga in Artphilein Editions.

Image: William Kentridge, I am not me, the horse is not mine, 2008, Video still of installation, Courtesy the artist and Goodman Gallery