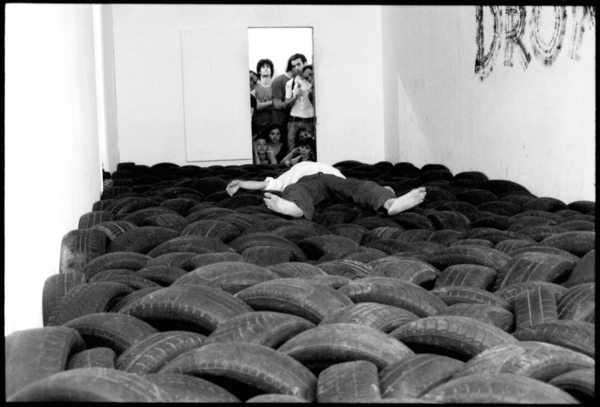 You will be walking on top of a new ground, 60 cm above the gallery floor. You will stay between animal and human perspective (looking towards the newly constructed floor – straight to keep balance) You slow down, you perform the act of relearning to walk.
Costa’s Dromosphere, that borrowed its name from Paul Virilio, is both the physical and conceptual ground for the exhibition. It evokes a certain pollution of time and space, the disappearance of the distances between places and the annihilation of space for the sake of time, the loss of touch with Earth.

With a similar idea of being disconnected to the natural, the work of Melanie Bonajo’s Night soil-fake paradise, attempts to recreate a new system of values or ethics in a symbiosis between the spiritual, the artistic and the political, critical to the socio-political environment we live in. The use of ayahuasca an Amazon natural medicine with psychedelic effects can be related to the use of LSD in the 60’s and the idea of an ultra sensitive body capable of remaking a new form of understanding the world free from its rational and socially built constraints.

Made in a very different time and space, Filipe Feijão has been for the last 10 years, building a staircase outside his house, where he displays found and made objects that change with the weather as time passes by. In a complex mixture between the erudite and the popular, the natural and organic evolution and the alchemic, Feijão’s works have remained invisible, like a secret service1 shared only with friends and visitors of his home. The great challenge of presenting this complex oeuvre has routes on the ideas of the space between studio and exhibition and in situ production and its reproduction.

In a similar act of restaging, a vernacular vest from a performance is displayed quasi like a religious artifact. The work was used as prop for Jeffrey, alter ego of Hugo Canoilas, for Sinhô Elias – a performance that tackled the “current situation”2. In a mixture between the poetic and the faux prophetic speeches, the brain and the stomach, and paying homage to Norbert Elias, the vest remains as an empowered object, the only remain of a performance. As object, the vest is composed with images and text over batik like abstract painting that continue the artists interest in the relation between language and images and its mutual interference.

In perfect harmony between form and meaning, the works of Viola Yesiltaç give a place for the viewer to dive into a meditative stage. The viewer, with it’s voracity for meaning, read the poetic and yet affirmative texts painted, releasing their bodies to another time and form of communication, that of a body with another. Dromosphere aims to be a receptacle for the projections of the visitors. Its real matter is the interconnection that it evokes towards the whole – the artistic, social and the political, at the contemporary moment.

Galleria Collicaligreggi
via Indaco (via Raffineria), 23 Catania
From Tuesday to Saturday, 4 pm - 7 pm or by appointment