Data space. She has led her to create a concept of "recording the present" using copper wire. With this material she creates a new physical relationship to objects and space. 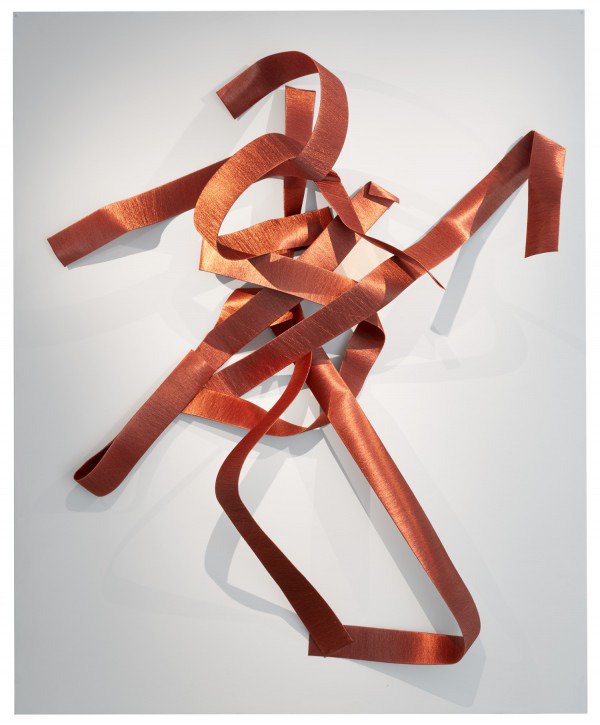 The Espace Louis Vuitton Paris carries on its ongoing exploration of the relationship between art and thread, and invites Franco-British artist Alice Anderson to draw inspiration from the space itself and create a unique exhibition: DATA space.

In this global digital age where our memories are stored externally, or disembodied, Alice Anderson believes it is absolutely vital to develop an additional process of recording memory. Anderson’s intuition that the digital revolution will prove to be as critical to human memory as was the advent of writing, has led her to create a concept of “recording the present” using copper wire. With this material she creates a new physical relationship to objects and space.

Copper wire is imbued with strong symbolism. Its conductivity facilitates connections, much like neurotransmitters in the human brain. Its luminosity is hypnotizing and reminiscent of the enthralling power of fire. Its musicality derives from the unwinding of the wire rattling over bobbins, which occurs during “weaving” performances, inviting a dance with the invisible. It naturally calls for the preservation of objects, to ‘mummify’ them and ‘keep them in memory’.

Alice Anderson has developed her own “weaving” technique, which entails winding copper wire indefinitely around selected objects during a ritual-like performance. The artist works barefoot, either alone or in a group, repeating the action, which is never the same. The copper wire becomes an extension of the body. Like in a primitive rite around fire, this ceremony is a shared experience where everyone is invited to weave their own identity within this universal movement.
At the end of the performance, the now “mummified object” reveals itself as a sculpture. The unpredictable micro-tensions within the wire sometimes continue to distort: the movement spreads around the shape modifying its form. It bends the metal, the fibreglass, and protects the stone.

For DATA space, Alice Anderson wishes to record data related to the Espace Louis Vuitton Paris by measuring certain dimensions of its architecture. Wooden floorboards have been rearranged to form new rounded geometrical shapes, somewhat like diagrams of the physical dimensions, recorded in 3D by the copper wire. The skylights of the Rotunda have been remodelled in steel and then woven with copper wire; combined, they form a dance, once the pressure from the copper wire has bent the material. The elevator has been turned into a simple parallelepiped, and for the first time, visitors will be able to see the elevator cables. Certain sections of lighting track create a vertical ensemble that is infinitely adjustable. Finally, the housings of the neon lights on the ceiling find themselves interconnected by the wires pulled between them. Throughout the exhibition, visitors are invited to discover the performances during which these unique works of art, crystallized in time, were made.

There is no nostalgia in Anderson’s approach, but rather a desire to create new time capsules and constant movement. In an endless search for new landmarks.

About Alice Anderson
Born in London (England) in 1972. Currently lives and works in London (England).
Alice Anderson carried out her studies at the Ecole national supérieure des Beaux-Arts, Paris (France) and then at Goldsmiths College, London (England) from 2001 to 2004. Anderson’s first solo exhibition, Rituals, was held in 2011 at London’s Freud Museum. Subsequently, her work was presented at the Whitechapel Art gallery in 2012, the 55th Venice Biennale in 2013, the Rizzordi Foundation in Saint Petersburg in 2014 and the Saatchi gallery in 2015. In the coming months, Anderson will be opening the new contemporary art space of the Wellcome Collection in London.
Over the course of 2010, Alice Anderson developed a unique technique of weaving that consists of winding copper wire around an object, which appears “mummified” when the performance is completed. In 2012, she founded the “Travelling Studio”, a unique itinerant space establishing connections between people, communities and cultures. The Studio aims to create a collective archive with these mummified significant objects as witnesses of our time. The artist reaffirms the vital importance of leaving physical traces of human existence at the heart of this captivating digital age in which we are evolving.

Espace Louis Vuitton Paris
60, rue de Bassano 101, avenue des Champs-Élysées 75008 Paris
Open from Monday to Saturday from 12pm to 7pm and on Sunday from 11am to 7pm.
Open on public holidays