G.I.F.T. Marti reactivates his guesthouse TwoHOTEL. The set-up is: to accept a piece by Marti - a clay form, a sculpture - in exchange for a piece donated by each of the other participating artists. 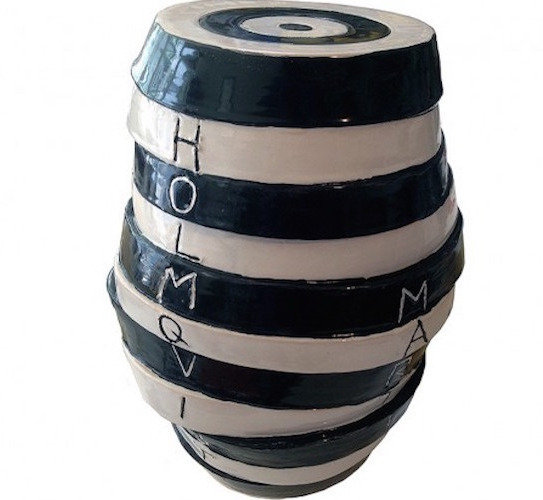 New exhibition space Der TANK at Campus of the Arts

For this new project Fabian Marti has decided to reactivate his TwoHOTEL, an artist’s guesthouse he originally built on Piracanga Beach in Bahia, Brazil and subsequently replicated in 2013. The piece serves as a site for an exchange between Marti and a still undetermined number of other artists he admires. The set-up is simple: to accept a piece by Marti – a clay form, a sculpture – in exchange for a piece donated by each of the other participating artists. All pieces will then be exposed, rather than exhibited, under the roof of the TwoHOTEL, rebuilt inside The Tank.

Though difficult, it is not impossible to differentiate between a society, an association, a club, a party, and a community. Art, in both its societal and economical aspects, does not rely on existing structures but is, rather, an active participant in their construct. Fabian Marti researches the nature of the bonds artists create with other artists, with ideas, and with those who are able or willing to receive or purchase the results of a given art practice. It is neither the art nor the artists themselves but, rather, what we call the art world (or worlds) which provides certain operational tools that all the people involved – the artists, the gallerists, the viewers, the art lovers – use to distinguish art from non-art. We all contribute to an “interpretive community” that is constantly involved in learning the codes and categories of art, codes which are not, as commonly assumed in traditional aesthetics, visible or perceivable properties or qualities in things or artifacts themselves.

Marti’s piece can be considered both as an installation and as an exercise in exploring the complex field of forces that constitute art works as such. The artist produces an artwork specifically for the occasion of this very special exchange: a gift, a present. This work also acts as a litmus test, rendering visible the structure of the artist’s network. We see his friends and his preferences while also witnessing the reactions of those who were asked to participate. The collection of this atypical art institution, the TwoHOTEL shelter, can be seen as an parallel universe to other collections and forms of exchange, like the market or the fair. Fabian Marti’s piece provides both the context and the rules for the possibility of something appearing to us as art in this artist-to-artists conversation. The art world allows us to decipher the structure of both the symbolic and real capital that the piece reveals: all the intangible factors (friendship, skill, talent, or trust in other artists’ practices) that are or can be made into fungible values.

Fabian Marti born 1979 in Fribourg, lives and works in Zurich. He studied until 2006 at Zürcher Hochschule der Künste, continuing his studies at the Mountain School of Arts in Los Angeles until 2008. He works with, among other things, hybrid media such as photogramm, ceramic and paper. His projects, which span handcraft and mass production as well as question issues such as creativity and authorship, are realized worldwide. In 2013 he built his TwoHOTEL on Piracanga beach near Bahia in Brazil. It is a simple hotel built of shuttering boards modeled after the historical Hotel One in Kabul by Alighiero Boetti. Since then Fabian Marti deals with concept of the artist as legend, the utopia of a alternative society and the idea of an artists’ colony. As an off-shoot to the idea of an artist collective, he developed an alternative currency and introduced The Marti Coin, an artist coin imprinted with his fingerprint, into the art economy during the Klöntal Triennale 2014.